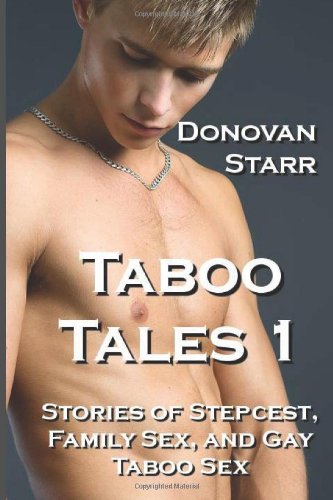 What could be hotter than getting hot and friendly with your stepbrother or your stepdad? There’s nothing more satisfying than enjoying a forbidden encounter. These stories collect five stories of gay taboo sex. Stories include: BAREBACKING DADDY Jon’s life changes when the ultra hot older man marries his Mom and moves in. Yes, Jon wants a piece of him badly, but he cannot cope with the new rules Kevin has established, especially as an adult. But, when he catches Kevin breaking the most important rule, he decides to punish him and to show him in his own special way who the man of the house is. MY HOT STEPSON Paul doesn’t know he’s going to have a stepson until right before the wedding. He also doesn’t know he’s unbelievably hot. On the night before the wedding, Drew makes a comment to him that convinces him that his hot stepson wants his body, but he doesn’t know how to make his move. But the first time they’re alone together, he simply must – or he’ll explode with desire. SEDUCING STEPDAD Lifelong best friends, Chris and Aaron, have become lovers in their college sophomore year, but sex with only each other has grown stale. They moon over all the hot campus guys, but that just isn’t enough—until talk of Chris’ new stepdad Mike is introduced. They both fiend over his youthful and sexy body, but can they lure him into a threesome to save their sex life? BAREBACKING WITH MY BROTHER Mark realized he had the hots for his sexy bad boy stepbrother Ryan when they were young, but he ran off soon after. Now that Ryan is spending house arrest at their house, things are really ready to steam up in ways Mark never could have imagined. Includes bareback sex, rough sex, stepcest, come swallowing and more! DOMINATING MY UNCLE DAVE Lucas adored his Uncle Dave (not by blood) from childhood and thought of him as being part of the family. Now that he’s grown up, he realizes how hot Dave is and some time spent naked in the hot tub causes them both to give in to their long-held desires.