Items related to Unfettered: Tales By Masters of Fantasy

Unfettered: Tales By Masters of Fantasy 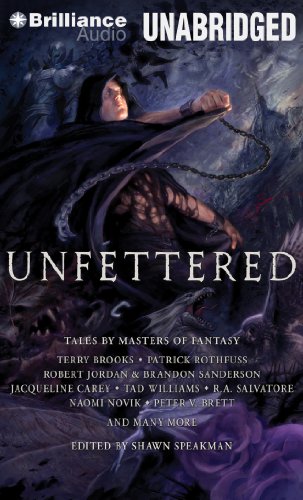 You define life or it defines you. In Shawn Speakman's case, it was both. Lacking health insurance and diagnosed with Hodgkin's lymphoma in 2011, Shawn quickly accrued a massive medical debt that he did not have the ability to pay.

With the help of stalwart friends and these wonderful short stories, Shawn has taken the gravest of life's hardships and created something magical. Unfettered is not only a fantastic anthology in its own right, but it's a testament to the generosity found in the science fiction and fantasy community—proof that humanity can give beyond itself when the need arises. After all, isn't that the driving narrative in fantasy literature?

Shawn Speakman grew up in the beautiful wilds of Washington State near Mt. St. Helens. After moving to Seattle to attend the University of Washington, he befriended New York Times bestselling fantasy author Terry Brooks and became his webmaster. Under Terry's tutelage, Shawn completed his writing certificate at the prestigious Maui Writers Conference before finishing his contemporary fantasy novel—The Dark Thorn. He was a manager at one of the largest Barnes & Noble Booksellers in the country for many years but now owns the online bookstore The Signed Page, manages the websites for authors Naomi Novik and David Anthony Durham, and freelance writes for Random House at Suvudu. Shawn is a cancer survivor, loves dark beer, and currently lives in Seattle, Washington.

1. Unfettered: Tales By Masters of Fantasy

Book Description Brilliance Audio, 2014. Audio CD. Condition: Good. Connecting readers with great books since 1972. Used books may not include companion materials, some shelf wear, may contain highlighting/notes, may not include cdrom or access codes. Customer service is our top priority!. Seller Inventory # S_245321654