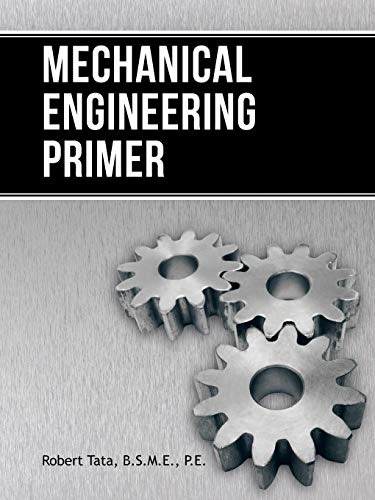 This book is written for the young who want to prepare for a technical career or others who may want to broaden their horizons. It is written in an easy to understand step-by-step style and contains more pages of illustrative examples than pages of text enabling the reader to better understand the subject matter. At the end is a twenty question quiz should this book be used for class room study or for the challenge or enjoyment of other readers. A wide range of engineering topics are discussed starting with fundamental issues such as engineering materials, drawings, fasteners, couplings, belts, and pulleys. It then provides more in depth discussions on gears, bearings, shafts, and automotive power transmission. It concludes with a discussion on engineering patents featuring an example of an actual automotive patent application submitted by the author and approved by the U.S. Patent Office.

The author has a BSME from Case-Western University, Cleveland, Ohio. He is a registered Professional Engineer in the State of Ohio. He has had 40 years of Mechanical Engineering experience, 26 of which were with the General Motors Corporation. While there, he obtained U.S. Patent number 4,645,432, "Magnetic Drive Vehicle Coolant Pump". He went on to become a leader in anti-friction bearing applications in both the automotive and industrial fields. Valuable experience was also gained in gears and mechanical power transmission. Prior to that he was employed by TRW, Cleveland, Ohio, where he was responsible for bearings, gears and mechanical power transmission in the aircraft and missile fields under the tutelage of Mr. Thomas Barish, a leading mechanical power transmission consultant. Also, Mr. Tata has authored 25 technical papers that are available on the internet and other sources for professional development hours. He is also the author of the book The Development of U.S. Missiles During the Space Race with the U.S.S.R. It is based on his experience, early in his career, working as a Flight Test Engineer at Cape Canaveral, Florida during the Cold War with the U.S.S.R. More recently, Mr Tata has ventured outside the technical field in authoring his second book, "The Greatest American Presidents". Following that is his third work, a part technical, part historical book titled "How Detroit became the "Automotive Capital of the World"