Items related to The Most Powerful Women in the Middle Ages: Queens,...

Rank, Melissa; Rank, Michael The Most Powerful Women in the Middle Ages: Queens, Saints, and Viking Slayers, From Empress Theodora to Elizabeth of Tudor

The Most Powerful Women in the Middle Ages: Queens, Saints, and Viking Slayers, From Empress Theodora to Elizabeth of Tudor 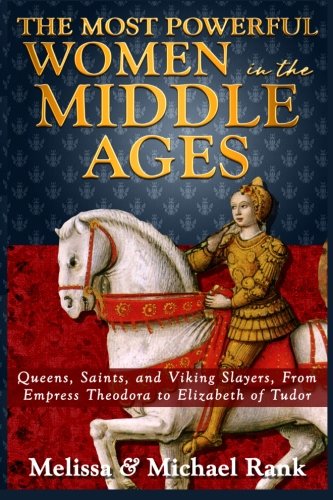 The idea of a powerful woman in the Middle Ages seems like an oxymoron. Females in this time are imagined to be damsels in distress, trapped in a high tower, and waiting for knights to rescue them, all while wearing traffic-cones for a hat. After rescue, their lives improved little. Their career choices were to be a docile queen, housewife, or be burned at the stake for witchcraft. But what if this image of medieval women is a complete fiction? It turns out that it is. Powerful female rulers fill the Middle Ages. Anglo-Saxon queen Aethelflaed personally led armies into direct combat with Vikings in the 900s and saved England from foreign invasion. Byzantine Empress Theodora kept the empire from falling apart during the Nika Revolts and stopped her husband Justinian from fleeing Constantinople. Catherine of Siena almost single-handedly restored the papacy to Rome in the 1300s and navigated the brutal and male-dominated world of Italian politics. Joan of Arc completely reversed the fortunes of France in the Hundred Years War and commanded assaults on English fortresses despite being an illiterate 17-year-old peasant. This book will look at the lives of the ten most powerful women in the Middle Ages. Whether it is the famed scholar Anna Komnene, who wrote the first narrative history, or Ottoman Queen Mother Kösem Sultan, who ruled the Islamic empire through three of her sons – all these women held extraordinary levels of power at a time when women were thought to not have any. It will explore how they managed to ascend the throne, what made their accomplishments so notable, and the impact they had on their respective societies after their deaths. It will also describe the historical background of these women, their cultures, and what about it helped or hindered their rise. Their stories still echo down to today. They are a testimony to the resiliency of individuals to accomplish extraordinary things, even if society puts on them enormous constraints.

Melissa Rank writes extensively on intercultural communication and health on her blog http://hungaryforturkey.wordpress.com. An avid traveler, she has taught English as a Second Language in many countries, including Indonesia, Turkey, Hungary and Rwanda. She is currently enjoying taking care of her young daughter and navigating the terrain of motherhood, and unlike many of the women in this book, has no plans of taking over the country or the world any time soon. Michael Rank is a doctoral candidate in Middle East history. He has studied Turkish, Arabic, Persian, Armenian, and French but can still pull out a backwater Midwestern accent if need be. He also worked as a journalist in Istanbul for nearly a decade and reported on religion and human rights. He does his best to help out Melissa raise their daughter, whom he secretly hopes can one day be in a book like this. But he would like her to seize power without having to go through all those marriages to surly men, of course. Michael is also the author of the #1 Amazon best-seller “From Muhammed to Burj Khalifa: A Crash Course in 2,000 Years of Middle East History,” and “History's Worst Dictators: A Short Guide to the Most Brutal Leaders, From Emperor Nero to Ivan the Terrible.”

1. The Most Powerful Women in the Middle Ages: Queens, Saints, and Viking Slayers, From Empress Theodora to Elizabeth of Tudor

Book Description CreateSpace Independent Publishing Platform, 2013. Paperback. Condition: Used; Good. **SHIPPED FROM UK** We believe you will be completely satisfied with our quick and reliable service. All orders are dispatched as swiftly as possible! Buy with confidence!. Seller Inventory # 3008714