Items related to The Education of Catholic Girls: A Series of Papers...

Janet Erskine Stuart The Education of Catholic Girls: A Series of Papers by Nineteen Headmistresses dealing with the History, Curricula, and Aims of Public Secondary Schools for Girls

The Education of Catholic Girls: A Series of Papers by Nineteen Headmistresses dealing with the History, Curricula, and Aims of Public Secondary Schools for Girls 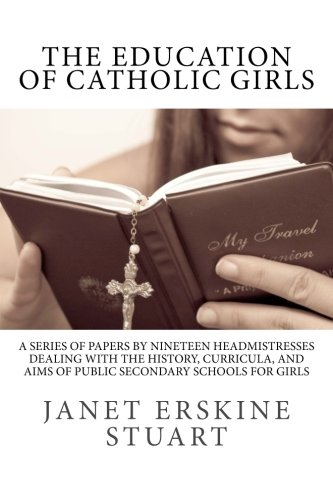 A century after its first publication, Mother Janet Erskine Stuart's classic The Education of Catholic Girls is back, and it is as relevant and useful as ever. Practical as it is pious, witty as it is wise, this collection of counsels not only helps educators in school or at home meet Catholic girls special intellectual needs, it offers sage strategies for whole-person formation: showing us how to help our girls grow into virtuous Catholic women.

"Catholic girls among other girls", writes Mother Stuart, "and Catholic women among other women, have the privilege as well as the duty of upholding what is highest." The Education of Catholic Girls will help you teach your girls whether through math and science, needlework, Catholic philosophy, or good manners to uphold what is highest; it will help you train them "to live a perfectly honorable and fearless life.”

IV. THE ELEMENTS OF CATHOLIC PHILOSOPHY

V. THE REALITIES OF LIFE

The effect on some of our Catholic schools of the newer methods has not been free from harm. Compelled by force of circumstances, parental or financial, to throw themselves into the current of modern educational effort, they have at the same time been obliged to abandon the quieter traditional ways which, while making less display, left a deeper impress on the character of their pupils. Others have had the courage to cling closely to hallowed methods built up on the wisdom and experience of the past, and have united with them all that was not contradictory in recent educational requirements. They may, thereby, have seemed to some waiting in sympathy with the present, and attaching too great value to the past. The test of time will probably show that they have given to both past and present an equal share in their consideration.

It will certainly be of singular advantage to those who are engaged in the education of Catholic girls to have before them a treatise written by one who has had a long and intimate experience of the work of which she writes. Loyal in every word to the soundest traditions of Catholic education, the writer recognizes to the full that the world into which Catholic girls pass nowadays on leaving school is not the world of a hundred, or of fifty, or of even thirty years ago. But this recognition brings out, more clearly than anything else could do, the great and unchanging fact that the formation of heart and will and character is, and must be always, the very root of the education of a child; and it also shows forth the new fact that at no time has that formation been more needed than at the present day.

The pages of this book are well worthy of careful pondering and consideration, and they will be of special value both to parents and to teachers, for it is in their hands and in their united, and not opposing action, that the educational fate of the children lies.

1. The Education of Catholic Girls: A Series of Papers by Nineteen Headmistresses dealing with the History, Curricula, and Aims of Public Secondary Schools for Girls