Items related to Decisive Moments in History: The Manhattan Project 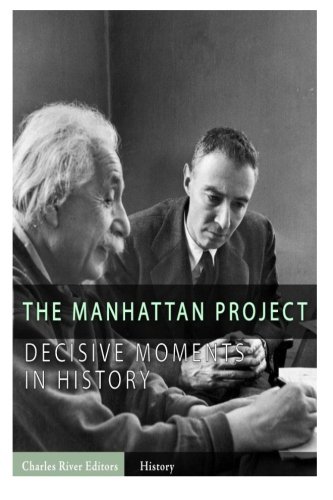 *Includes over 20 pictures of the important people, places, and events associated with the Manhattan Project.
In the 19th century, the Scottish writer Thomas Carlyle famously wrote, "The history of the world is but the biography of great men", popularizing the “Great Man” theory that the course of history is shaped by a select few heroic individuals. While historians and others continue to debate the accuracy of the Great Man theory of history, there is no question that the course of history is permanently altered by decisive moments in time, where a different result would have produced drastically different outcomes. Charles River Editors’ Decisive Moments in History examines the events that changed history forever and set the world down the path it finds itself on today.
During World War II, the free world literally hung in the balance, with the Axis and Allies engaging in warfare on an unprecedentedly violent scale. Tens of millions would die as the warring powers raced to create the best fighter planes, tanks, and guns. Eventually that race extended to bombs which carried enough power to destroy civilization itself.
While the war raged in Europe and the Pacific, a dream team of Nobel Laureates was working on a project so secretive that vice president Harry Truman didn’t know of it when he took the presidency after FDR’s death. This secretive project, The Manhattan Project, would ultimately yield the “Little Boy” and “Fat Man” bombs that released more than 100 Terajoules of energy at Hiroshima and Nagaski; changing the course of the War and the course of civilization.
Decisive Moments in History: The Manhattan Project covers the beginning of atomic research prior to the Manhattan Project, the exodus of talented scientists fleeing Nazi Germany throughout Europe, and the history and results of the grand project that ushered in the Atomic Age. Along with pictures of the important people and events associated with the Manhattan Project, you will learn about the dawn of the Atomic Age like you never have before, in no time at all.