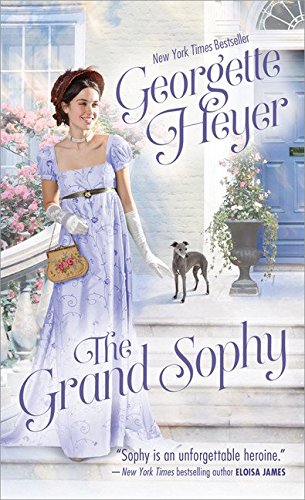 One of Georgette Heyer's most popular Regency romances-What are you waiting for?!

Sophy arrives at her aunt's house just in time to save her mixed-up family from itself. Everyone is hanging out with the absolute wrong person, and the whole place is in an uproar. Luckily, Sophy knows the shocking tricks to straighten things out, and it starts with throwing a really grand party...

When Sophy goes to stay with her cousins in Berkeley Square, she finds them in a sad tangle of affairs - some romantic and others of a more pecuniary nature. Perhaps the Grand Sophy has arrived just in time to save them.

Georgette Heyer's novels have charmed and delighted millions of readers for decades. English Heritage has awarded Georgette Heyer one of their prestigious Blue Plaques, designating her Wimbledon home as the residence of an important figure in British history. She was born in Wimbledon in August 1902. She wrote her first novel, The Black Moth, at the age of seventeen to amuse her convalescent brother; it was published in 1921 and became an instant success.

Heyer published 56 books over the next 53 years, until her death from lung cancer in 1974. Her last book, My Lord John, was published posthumously in 1975. A very private woman, she rarely reached out to the public to discuss her works or personal life. Her work included Regency romances, mysteries and historical fiction. Known as the Queen of Regency romance, Heyer was legendary for her research, historical accuracy and her extraordinary plots and characterizations. She was married to George Ronald Rougier, a barrister, and they had one son, Richard.