Items related to The Mentalist 9 Steps to Influence

The Mentalist 9 Steps to Influence 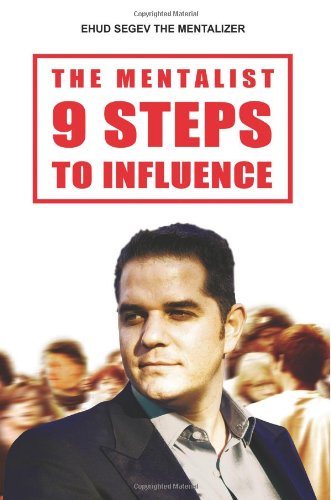 Written by world renowned mentalist Ehud Segev, "The Mentalist 9 Steps to Influence" is the only book that reveals the secret techniques that mentalists use to influence and manipulate people. In this quick but comprehensive and thorough beginners guide, you will learn how to take advantage of the power of Mentalism in 9 easy steps. This is NOT a guide for those who are looking to learn how to fool others. It is NOT a heavy psychology or research book that you might find tedious! It is basically the BEST resource you can find today that will teach you the basics of real life Mentalism in a simple and fun way. By following and practicing these 9 steps you'll have the power to influence everyone around you and change your life for the better. Imagine what you could do if every detail, every word, every gesture, every subtle hint that was ever presented before you, would not go unnoticed by your keen, all-seeing senses! Have you ever wanted to be considered extraordinary? Have you ever wanted to have the sense of self which would make you comfortable with everything around you? What would you do if you had the power to READ people and know what they are thinking and feeling? What would you do if you could use this knowledge - just like Patrick Jane from the successful TV show “THE MENTALIST” - in order to influence others and succeed in everything you do? If you’d like to learn the mentalist secrets and understand how a mentalist uses his powers to READ people and INFLUENCE them, this is the book for you!

World renowned mentalist Ehud Segev, aka The Mentalizer, was born in 1979 in the Israeli city of Safed, long known as the spiritual center of the Jewish world. In the 16th century Safed emerged as the city of Kabbalah, the oldest, most influential wisdom of mysticism from throughout history. Most of the great scholars and Rabbi’s who studied and taught the secrets of Kabbalah lived in this great city, and it is also where Ehud Segev began his spiritual destiny. Ehud Segev, the “Mentalizer” or mental analyzer, combines his acting skills with his special, strong connection to people in order to provide entertainment as well as life understanding. His reputation for having a connection to the universe and his ability to read minds, analyze behavior and influence people set the stage for his worldwide success. At the age of 16, he was featured on the news for his unique ability, one that some people consider magic and others consider spirituality. Segev has another way of explaining it, one that he refers to as “magic from the mind.” Now performing shows all around the world, including being featured on shows such as NBC’s series “Phenomenon,” as well as on numerous Israeli television networks, Segev’s reputation is a positive one. Ehud Segev is concerned with providing people with something more than just entertainment, and that inner sense that by watching him they gain a deeper understanding on life. He also seeks to help people understand how they can put to practice some of his techniques to use in their own life through his program “How to Be a Mental Analyzer.” A program based on in-depth studies of human behavior patterns and the psyche, Segev believes anyone can learn his techniques of neuro-linguistic programming and interpreting body language to enhance daily interactions in the workplace and home. His belief is that these abilities can be used by anyone, to further good in the world and better humanity, one person at a time. “Yes, I am gifted. And I am now here to share this phenomenal gift with you. Each one of us is a prophet and each one of us is a leader and a follower, it’s just about using these as tools. Everyone can learn how to take advantage of these tools.” This is Segev's first published book.

1. The Mentalist 9 Steps to Influence

Book Description Paperback. Condition: Good. The book has been read but remains in clean condition. All pages are intact and the cover is intact. Some minor wear to the spine. Seller Inventory # GOR009511933