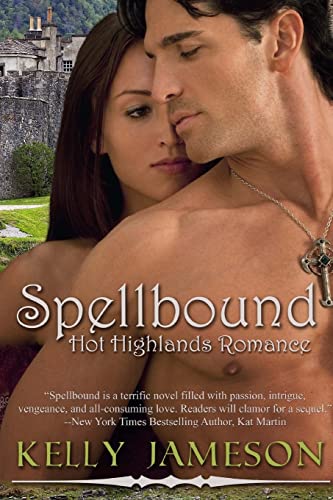 "An unforgettable highland warrior seeking revenge, an innocent maiden brave enough to confront him. Spellbound is a terrific novel filled with passion, intrigue, vengeance, and all-consuming love. Readers will clamor for a sequel." --Kat Martin, New York Times best-selling author with over 11 million books in print Highland warrior Kade MacAlister has had to fight for everything. Respect. Approval. Love. To prove himself man and warrior and to win the hand of the woman he seeks to marry, he leaves Scotland to fight in Ireland. When he returns, he finds his clan has been attacked by the MacKinnons, with whom they’ve been at peace. His older brother and his betrothed are dead. Kade discovers the chieftain Brodie MacKinnon has a daughter with the Sight, Maighdlin, whom he hid away in a village years ago to protect. A bride was taken from him, so he’ll take a new bride—his enemy’s daughter—and make her pay for her father’s sins. Kade finds Maighdlin and kidnaps her. But when their paths cross, sparks fly, and Kade is spellbound. Maighdlin has no idea how hot it’s going get in her new husband’s arms. To make things more complicated, Maighdlin can see Kade’s brother’s spirit, and Kade must learn of a terrible family secret before his brother Niall can find peace. Kade and his new bride will be consumed by his quest for revenge unless they can learn to forgive...surrendering to the sensual fires of their bodies and the love in their hearts.

Book Description CreateSpace Independent Publishing Platform. Paperback. Condition: Very Good. A copy that has been read, but remains in excellent condition. Pages are intact and are not marred by notes or highlighting, but may contain a neat previous owner name. The spine remains undamaged. At ThriftBooks, our motto is: Read More, Spend Less. Seller Inventory # G1492870242I4N00