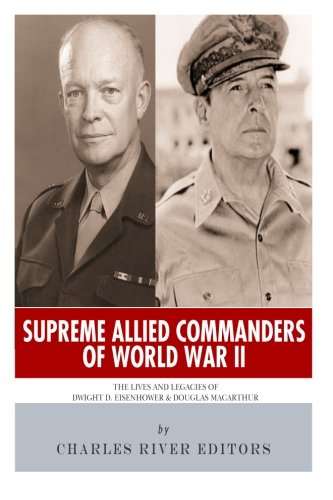 *Weaves the lives and careers of both generals into one entertaining and educational narrative.
*Includes MacArthur's most colorful and inspiring quotes, including his famous Victory Broadcast and Farewell Address to Congress.
*Includes pictures of Eisenhower, MacArthur and other important people, places, and events.
*Discusses the careers and relationship between both generals.
*Explains their roles in the Atlantic and Pacific, particularly the Philippines and D-Day.
*Includes a Bibliography for further reading.
“There is no substitute for victory.” – Douglas MacArthur
Dwight Eisenhower and Douglas MacArthur were the two most famous generals in the United States during World War II. Having risen the ranks via mostly administrative jobs between the two World Wars, the two men worked together in the Philippines during the 1930s, only to go their separate ways and earn eternal fame as Supreme Allied Commanders in the Atlantic and Pacific Theaters.
A career military man, Ike was too young to serve in combat during World War I, but he began a long and productive career collaborating with future military legends George Patton and Douglas MacArthur while serving some of the nation’s other famous generals, including George Marshall and John J. Pershing. Amazingly, he had never served in anything but administrative positions before World War II.
By 1942, Eisenhower was given the role of appointed Supreme Commander Allied (Expeditionary) Force in North Africa, and after his success there, Eisenhower oversaw the invasion of Sicily in 1943, which at the time had been the largest amphibious invasion in history. In both campaigns he had the fortune of commanding George Patton.
With those successes, President Roosevelt picked Eisenhower to be the Supreme Allied Commander of the Allied Expeditionary Force, leaving him in charge of Operation Overlord and the defining moment of his military career, D-Day.
By the time he died in 1969, President Nixon aptly described Eisenhower as “the world's most admired and respected man, truly the first citizen of the world.”
Of all the military men America produced during the 19th and 20th centuries, it’s hard to find one as important, successful and controversial as General Douglas MacArthur. The son of a Civil War veteran, MacArthur rose to become the most instrumental commander in the Pacific Theater during World War II. His legendary return to the Philippines in 1944 made good on one of the war’s most famous vows, and it was MacArthur who fittingly who oversaw the occupation and reconstruction of Japan following the war.
Given his long and celebrated career, MacArthur was the obvious choice to lead the newly created United Nations’ troops during the Korean War, but his arguments over war strategy and policy eventually led to his controversial firing by President Harry Truman in 1951. After that, in his own words, he “faded away”, living out his remaining days on the top floor of the Waldorf Hotel until his death in 1964. For many with a conservative disposition he remains a hero who, had he been listened to, would have prevented the current impasse with the rogue state that is modern North Korea. For some liberal thinkers he was dangerously obsessive while wholly ignorant of geopolitics, and he has been branded as a general who would have used atomic weapons and potentially triggered the third world war.
Supreme Allied Commanders of World War II profiles the lives, careers, relationship and legacies of the two legendary generals, along with pictures, a bibliography and a Table of Contents.