Items related to American Slavery As It Is: Testimony of a Thousand...

Weld, Theodore Dwight American Slavery As It Is: Testimony of a Thousand Witnesses

American Slavery As It Is: Testimony of a Thousand Witnesses 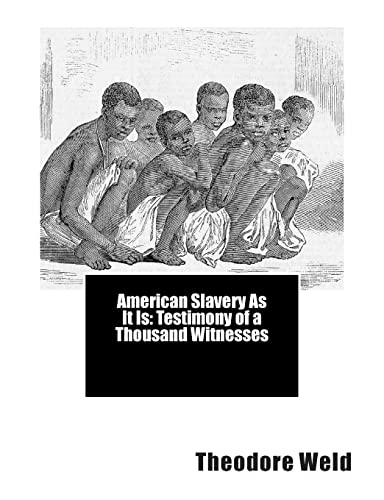 READER, you are empanelled as a juror to try a plain case and bring in an honest verdict. The question at issue is not one of law, but of fact--"What is the actual condition of the slaves in the United States?" A plainer case never went to a jury. Look at it. TWENTY-SEVEN HUNDRED THOUSAND PERSONS in this country, men, women, and children, are in SLAVERY. Is slavery, as a condition for human beings, good, bad, or indifferent? We submit the question without argument. You have common sense, and conscience, and a human heart;--pronounce upon it. You have a wife, or a husband, a child, a father, a mother, a brother or a sister--make the case your own, make it theirs, and bring in your verdict. The case of Human Rights against Slavery has been adjudicated in the court of conscience times innumerable. The same verdict has always been rendered--"Guilty;" the same sentence has always been pronounced, "Let it be accursed;" and human nature, with her million echoes, has rung it round the world in every language under heaven, "Let it be accursed. Let it be accursed." His heart is false to human nature, who will not say "Amen." There is not a man on earth who does not believe that slavery is a curse. Human beings may be inconsistent, but human nature is true to herself. She has uttered her testimony against slavery with a shriek ever since the monster was begotten; and till it perishes amidst the execrations of the universe, she will traverse the world on its track, dealing her bolts upon its head, and dashing against it her condemning brand. We repeat it, every man knows that slavery is a curse. Whoever denies this, his lips libel his heart. Try him; clank the chains in his ears, and tell him they are for him; give him an hour to prepare his wife and children for a life of slavery; bid him make haste and get ready their necks for the yoke, and their wrists for the coffle chains, then look at his pale lips and trembling knees, and you have nature's testimony against slavery. Two millions seven hundred thousand persons in these States are in this condition. They were made slaves and are held such by force, and by being put in fear, and this for no crime! Reader, what have you to say of such treatment? Is it right, just, benevolent? Suppose I should seize you, rob you of your liberty, drive you into the field, and make you work without pay as long as you live, would that be justice and kindness, or monstrous injustice and cruelty? Now, every body knows that the slaveholders do these things to the slaves every day, and yet it is stoutly affirmed that they treat them well and kindly, and that their tender regard for their slaves restrains the masters from inflicting cruelties upon them. We shall go into no metaphysics to show the absurdity of this pretense. The man who robs you every day, is, forsooth, quite too tender-hearted ever to cuff or kick you! True, he can snatch your money, but he does it gently lest he should hurt you. He can empty your pockets without qualms, but if your stomach is empty, it cuts him to the quick. He can make you work a life time without pay, but loves you too well to let you go hungry. He fleeces you of your rights with a relish, but is shocked if you work bareheaded in summer, or in winter without warm stockings. He can make you go without your liberty, but never without a shirt. He can crush, in you, all hope of bettering your condition, by vowing that you shall die his slave, but though he can coolly torture your feelings, he is too compassionate to lacerate your back--he can break your heart, but he is very tender of your skin.

An extensive collection of first-hand testimony and narratives by slaveholders describing the facts and highlighting the cruelty of the slave trade. First published in 1839 and edited by the evangelist and abolitionist Theodore Dwight Weld (1803-95), this work was one of the most influential books of the anti-slavery movement.

Connecticut farmer-turned-abolitionist Theodore Dwight Weld (1803–1895) was a central leader of the American Anti-Slavery Society and traveled the country lecturing against slavery. His work in compiling the testimony of those who had experienced life in bondage was a major influence on Harriet Beecher Stowe's Uncle Tom's Cabin.