Items related to The Signature of All Things: Signatura Rerum

Boehme, Jacob The Signature of All Things: Signatura Rerum

The Signature of All Things: Signatura Rerum 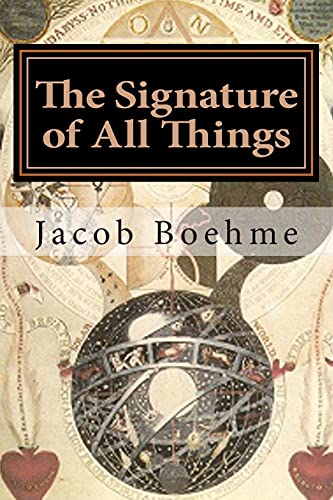 Signatura Rerum (The doctrine of signatures), written by the German mystic, Jacob Boehme. It has been reprinted and re-titled as The Signature of All Things. The author was considered an original thinker within the Lutheran tradition, and his first book, commonly known as Aurora, caused a great scandal and threatened him with excommunication.

How does the individual relate to the world, to the universe, to the soul? The question is fundamental to both modern theology and modern psychology, and much of the contemporary thinking on the matter grew out of this numinous treatise by German mystic JACOB BOEHME (1575-1624), one of the most confounding of the Reformation-era Christian theologians.

Also known as the Signatura Rerum and first published in 1621, this is one of Boehme's major works; in it, he expounds upon:

* the "great Mystery of all Beings" * "Sulphurean Death" * the "inward and outward Cure of Man" * the "Emnity of the Spirit and Body" * the "Generation of Good and Evil" * and more.

Radical and controversial in his day--he was constantly drawing the ire of the Church--Boehme was a profound influence on subsequent Europe thinkers including Hegel, Schopenhauer, Nietzsche, and Jung, and this challenging work will intrigue anyone interested in the esoteric roots of current philosophy and theology.

Jakob Böhme was a German Christian mystic and theologian. Twelve years after a vision in 1600, Böhme began to write his first book, Die Morgenroete im Aufgang (The rising of Dawn). The book was given the name Aurora by a friend; however, Böhme originally wrote the book for himself and it was never completed. The chief concern of Böhme's writing was the nature of sin, evil and redemption. Consistent with Lutheran theology, Böhme preached that humanity had fallen from a state of divine grace to a state of sin and suffering, that the forces of evil included fallen angels who had rebelled against God, and that God's goal was to restore the world to a state of grace.