Items related to Semiparametric Regression with R (Use R!) 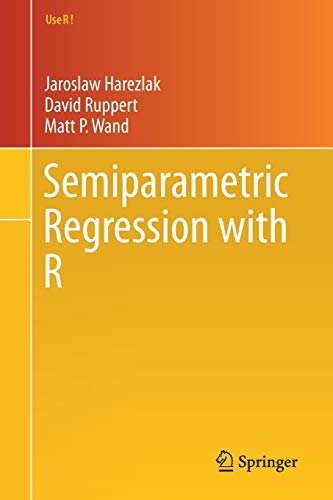 Semiparametric Regression with R introduces the basic concepts of semiparametric regression with a focus on applications and R software. This volume features case studies from environmental, economic, financial, and other fields. The examples and corresponding code can be used or adapted to apply semiparametric regression to a wide range of problems. It contains more than fifty exercises, and the accompanying HRW package contains all datasets and scripts used in the book, as well as some useful R functions.

This book is suitable as a textbook for advanced undergraduates and graduate students, as well as a guide for statistically-oriented practitioners, and could be used in conjunction with Semiparametric Regression. Readers are assumed to have a basic knowledge of R and some exposure to linear models. For the underpinning principles, calculus-based probability, statistics, and linear algebra are desirable.

David Ruppert is Professor of Statistical Science and the Andrew Schultz Jr. Professor of Engineering at the School of Operations Research and Information Engineering at Cornell University. He is a Fellow of the American Statistical Association and the Institute of Mathematical Statistics and received the Wilcoxon Prize in 1986.  Ruppert was named a Highly Cited researcher by ISI, now known as Clarivate Analytics. His current research focuses on astrostatistics, measurement error models, splines, semiparametric regression, and environmental statistics. He has published over 100 articles in refereed journals and has published five books.He is a past editor of the Journal of the American Statistical Association and of the Electronic Journal of Statistics
Jaroslaw Harezlak is Associate Professor in the Department of Epidemiology and Biostatistics at the Indiana University School of Public Health in Bloomington. He has a Ph.D. in biostatistics from the Harvard University. After a 2-year post-doctoral training at the Harvard School of Public Health, he joined Indiana University as an Assistant Professor. His interests span a number of medical areas: including NeuroHIV, physical activity, sexually transmitted infections, and concussions, as well as statistical areas: including semiparametric regression, functional data analysis and structured high-dimensional data. In his applied research, he uses data arising in structural and functional brain imaging, accelerometry, and intensively collected longitudinal studies. He has published over 50 peer-reviewed articles in the statistical, medical and epidemiological journals as well as 3 invited chapters.

Shipping: US$ 16.18
From United Kingdom to U.S.A.
Destination, rates & speeds

Shipping: US$ 21.59
From United Kingdom to U.S.A.
Destination, rates & speeds

Shipping: US$ 3.23
From United Kingdom to U.S.A.
Destination, rates & speeds

Shipping: US$ 16.18
From United Kingdom to U.S.A.
Destination, rates & speeds

Book Description Kartoniert / Broschiert. Condition: New. Dieser Artikel ist ein Print on Demand Artikel und wird nach Ihrer Bestellung fuer Sie gedruckt. It is accompanied by the web-site:&nbspsemiparametric-regression-with-r.net and contains pointers to datasets and R code relevant to this bookThis book helps to close the gap between the available methodology and their use in practiceBecause . Seller Inventory # 234786829