Items related to The Masterpiece 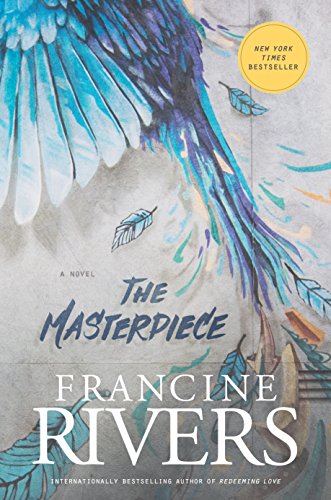 In this unexpected and redemptive love story, successful LA artist Roman Velasco appears to have everything he could possibly want money, women, fame. Only Grace Moore, his reluctant, newly hired personal assistant, knows how little he truly has. The demons of Roman's past seem to echo through the halls of his empty mansion and out across his breathtaking Topanga Canyon view. But Grace doesn't know how her boss secretly wrestles with those demons: by tagging buildings as the Bird, a notorious but unidentified graffiti artist an alter ego that could destroy his career and land him in prison. Like Roman, Grace is wrestling with ghosts and secrets of her own. After a disastrous marriage threw her life completely off course, she vowed never to let love steal her dreams again. But as she gets to know the enigmatic man behind the reputation, it's as if the jagged pieces of both of their pasts slowly begin to fit together . . . until something so unexpected happens that it changes the course of their relationship and both their lives forever. New York Times bestselling author Francine Rivers returns to her romance roots with this probing tale that reminds us that mercy can shape even the most broken among us into an imperfect yet stunning masterpiece.

The ghosts of his past hold him captive.
Her missteps bring her to his door.

New York Times bestselling author Francine Rivers returns to her romance roots with this unexpected and redemptive love story, a probing tale that reminds us that mercy can shape even the most broken among us into an imperfect yet stunning masterpiece.

A highly sought-after artist by day and clandestine graffiti prankster by night, Roman Velasco has shut his heart―until Grace Moore shows up on his doorstep. Grace has overcome too much in her life: she has survived her parents’ violent deaths; she has given up her own studies to support her husband through college only to find him cheating on her in their own house; and she has transcended the shock of an unplanned pregnancy. Through it all, Jesus has stood by her, even appearing as an angel to comfort her when she was a grieving 7-year-old trying to find a way to endure. Recently, she has found a home for herself and her 5-month-old son, Samuel, but living with the Garcias, who had hoped to adopt Samuel, is difficult, especially since Selah consistently pushes Grace away, casting herself as the boy’s constant maternal presence. So when Grace accepts a job as the temperamental Roman’s personal assistant, complete with a cottage to herself ―a cottage where she can start to separate from Selah and her family, where she can build a life for herself and Samuel ―it’s a dream come true. Roman’s rough language and atheism, however, trouble Grace, just as Grace’s spirituality and privacy trouble Roman. After all, he’s used to easy women and commitment-free interludes. Christian novelist Rivers (Earth Psalms, 2016, etc.) deftly threads Roman’s and Grace’s lives together as they tiptoe around their emotional scars, eventually shifting into a dance of tentative steps toward a love neither can resist. Fans of Christian romance will delight in this tale of salvation through love. (Kirkus Reviews)

Bestseller Rivers (Redeeming Love) brings unexpected faith to a fictionalized Banksy character in this ambitious novel. Roman Velasco is an artist who has his own studio, rising prestige, and large commissions―yet he keeps secret his life as the Bird, a renowned and elusive graffiti artist. Roman has searched for meaning in women, drink, and art but finds himself empty and angry. Enter Grace Moore, an emotionally wounded single mother who finds her meaning in God. She signs on as Roman’s personal assistant, eager for the job but not so sure about the temperamental artist. Rivers pits the brokenness of these two―Roman’s abandonment and trust issues and Grace’s guilt and pain―against each other and the power of Jesus. Although Rivers too often uses phrases such as “he muttered a four-letter word” in place of cruder words, and frequently reverts to what feels like Christian jargon (“Two people saved by grace. That makes you my brother in Christ.”), the tale will have her long-standing fans hooked. And the fully formed Roman will likely garner her new ones. (Publishers Weekly)

The long wait between Francine Rivers’ novels is well worth it when the final page of this book is turned. Richly detailed characters with traumatic pasts are woven together with Biblical truths and redemptive themes. On the surface, this seems like a very basic romance, but when the layers are peeled back, each of the characters’ choices in the past and present are thoughtfully explored. As Roman and Grace learn about each other, the reader, too, learns about them as glimpses into their lives are revealed carefully as they relate to current experiences. This is an amazing, beautifully written tale to be savored and pondered and shared with others. (Romantic Times)

Best-selling Rivers (Bridge to Haven, 2014) presents a lengthy, emotionally uninhibited tale of childhood trauma and its affects in adulthood. She handles the difficult topics of addiction, emotional abuse, gang activity, and murder-suicide, all connected to children, with unapologetic directness. Her writing is grounded in conservative Christian values and touches on deeper points of theology and the afterlife. Readers will marvel at Rivers’ storytelling arc encompassing the reconciliation of gritty past misdeeds with the work in progress of a life of forgiveness. (Booklist)

Famous artist Roman Velasco battles his demons in the night as The Bird, a graffiti artist. This alter ego draws from Roman’s past before fame and fortune made him wealthy but empty inside. Grace Moore is a suddenly single mother who needs to work. After her husband’s betrayal, she finds comfort in her faith. When an opportunity comes her way to be the personal assistant to the reclusive Roman, Grace is cautious but hopeful that the opportunity will give her some much-needed security. Little does either of them know how much they need each other. VERDICT Rivers (Earth Psalms) is known for creating memorable characters whose brokenness serves as a pathway to redemption and finding faith in Jesus. This character-driven romance will enthrall her many fans. (Library Journal)