Items related to The Long Way to a Small, Angry Planet

Chambers, Becky The Long Way to a Small, Angry Planet

The Long Way to a Small, Angry Planet 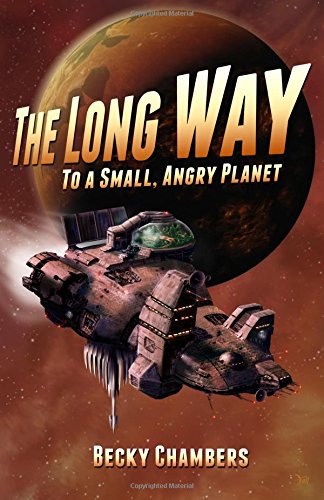 Somewhere within our crowded sky, a crew of wormhole builders hops from planet to planet, on their way to the job of a lifetime. To the galaxy at large, humanity is a minor species, and one patched-up construction vessel is a mere speck on the starchart. This is an everyday sort of ship, just trying to get from here to there. But all voyages leave their mark, and even the most ordinary of people have stories worth telling. A young Martian woman, hoping the vastness of space will put some distance between herself and the life she‘s left behind. An alien pilot, navigating life without her own kind. A pacifist captain, awaiting the return of a loved one at war. Set against a backdrop of curious cultures and distant worlds, this episodic tale weaves together the adventures of nine eclectic characters, each on a journey of their own.

A rollicking space adventure with a lot of heart

When Rosemary Harper joins the crew of the Wayfarer, she isn’t expecting much. The patched-up ship has seen better days, but it offers her everything she could possibly want: a spot to call home, a chance to explore the far-off corners of the galaxy and some distance from her past. And nothing could be further from what she’s known than the crew of the Wayfarer.

From Sissix, the exotic reptilian pilot, to Kizzy and Jenks, the chatty engineers who keep the ship running, to the noble captain Ashby, life aboard is chaotic and crazy—exactly what Rosemary wants. That is, until the crew is offered the job of a lifetime: tunneling wormholes through space to a distant planet. Sure, they’ll earn enough money to live comfortably for years, but risking her life wasn’t part of the job description.

The journey through the galaxy is full of excitement, adventure and mishaps for the Wayfarer team. And along the way, Rosemary comes to realize that a crew is a family, and that family isn’t necessarily the worst thing in the universe . . . as long as you actually like them.

Becky Chambers was raised in California as the progeny of an astrobiology educator, an aerospace engineer, and an Apollo-era rocket scientist. An inevitable space enthusiast, she made the obvious choice of studying performing arts. After a few years in theater administration, she shifted her focus toward writing. Her creative work has appeared at The Mary Sue, Tor.com, Five Out Of Ten, The Toast, and Pornokitsch. The Long Way to a Small, Angry Planet is her first novel, and was funded in 2012 thanks to a successful Kickstarter campaign.

After living in Scotland and Iceland, Becky is now back in her home state, where she lives with her partner. She is an ardent proponent of video and tabletop games, and enjoys spending time in nature. She hopes to see Earth from orbit one day.

Buy Used
Condition: Very Good
. A copy that may have a few cosmetic... Learn more about this copy

The Long Way to a Small, Angry Planet

Book Description Condition: Very Good. . A copy that may have a few cosmetic defects. May also contain a few markings such as an owner's name, short gifter's inscription or light stamp. Seller Inventory # R08D-00851