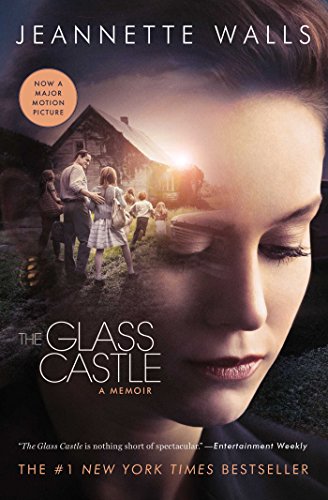 MORE THAN SEVEN YEARS ON THE NEW YORK TIMES BESTSELLER LIST
The perennially bestselling, extraordinary, one-of-a-kind, “nothing short of spectacular” (Entertainment Weekly) memoir from one of the world’s most gifted storytellers.

The Glass Castle is a remarkable memoir of resilience and redemption, and a revelatory look into a family at once deeply dysfunctional and uniquely vibrant. When sober, Jeannette’s brilliant and charismatic father captured his children’s imagination, teaching them physics, geology, and how to embrace life fearlessly. But when he drank, he was dishonest and destructive. Her mother was a free spirit who abhorred the idea of domesticity and didn’t want the responsibility of raising a family.

The Walls children learned to take care of themselves. They fed, clothed, and protected one another, and eventually found their way to New York. Their parents followed them, choosing to be homeless even as their children prospered.

The Glass Castle is truly astonishing—a memoir permeated by the intense love of a peculiar but loyal family.

Jeannette Walls grew up with parents whose ideals and stubborn nonconformity were both their curse and their salvation. Rex and Rose Mary Walls had four children. In the beginning, they lived like nomads, moving among Southwest desert towns, camping in the mountains. Rex was a charismatic, brilliant man who, when sober, captured his children's imagination, teaching them physics, geology, and above all, how to embrace life fearlessly. Rose Mary, who painted and wrote and couldn't stand the responsibility of providing for her family, called herself an "excitement addict." Cooking a meal that would be consumed in fifteen minutes had no appeal when she could make a painting that might last forever.

Later, when the money ran out, or the romance of the wandering life faded, the Walls retreated to the dismal West Virginia mining town -- and the family -- Rex Walls had done everything he could to escape. He drank. He stole the grocery money and disappeared for days. As the dysfunction of the family escalated, Jeannette and her brother and sisters had to fend for themselves, supporting one another as they weathered their parents' betrayals and, finally, found the resources and will to leave home.

What is so astonishing about Jeannette Walls is not just that she had the guts and tenacity and intelligence to get out, but that she describes her parents with such deep affection and generosity. Hers is a story of triumph against all odds, but also a tender, moving tale of unconditional love in a family that despite its profound flaws gave her the fiery determination to carve out a successful life on her own terms.

For two decades, Jeannette Walls hid her roots. Now she tells her own story. A regular contributor to MSNBC.com, she lives in New York and Long Island and is married to the writer John Taylor.

An exclusive Q&A with Jeannette Walls, author of The Glass Castle

Q: How long did it take you to write The Glass Castle and what was that process like?

A: Writing about myself, and about intensely personal and potentially embarrassing experiences, was unlike anything I’d done before. Over the last 25 years, I wrote many versions of this memoir -- sometimes pounding out 220 pages in a single weekend. But I always threw out the pages. At one point I tried to fictionalize it, but that didn't work either.

When I was finally ready, I wrote it entirely on the weekends, getting to my desk by 7:30 or 8:00 a.m. and continuing until 6:00 or 7:00 p.m. I wrote the first draft in about six weeks -- but then I spent three or four years rewriting it. My husband, John Taylor, who is also a writer, observed all this approvingly and quoted John Fowles, who said that a book should be like a child: conceived in passion and reared with care.

Q: How did you decide to follow The Glass Castle with Half Broke Horses?

A: It was completely at the suggestion of readers. So many people kept saying the next book should be about my mother. Readers understood my father's recklessness because they understood alcoholism, but Mom was a mystery to them. Why, they would ask, would someone with the resources to lead a normal life choose the existence that she did?

I would tell them a little bit about my mother’s childhood. She not only knew that she could survive without indoor plumbing, but that was the ideal period of her life, a time that she tries to recreate. I think that for memoir readers, it's not about a freak show– they’re just looking to understand people and get into a life that’s not their own. I thought, let me give it a shot, let me ask Mom. And she was all for it. But she kept insisting that the book should really be about her mother. At first I resisted because my grandmother, Lily Casey Smith, died when I was eight years old, more than 40 years ago. But I have a very vivid memory of this tough, leathery woman; she sang, she danced, she shot guns, she’d play honky tonk piano. I was always captivated by her. Lily had told such compelling stories—I was stunned by the number of anecdotes, and that Mom knew so much detail about them. Half Broke Horses is a compilation of family stories, stitched together with gaps filled in. They're the sort of tales that pretty much everyone has heard from their parents or grandparents. I realized that in telling Lily's story, I could also explain Mom's.

Q: Why did you decide to write Half Broke Horses in the first person, and how much of this "true-life novel" is fiction?

A: I set out to write a biography of Lily, but sometimes books take on a life of their own. I told it in first person because I wanted to capture Lily’s voice. I’m a lot like my grandmother, so it came easily to me. I planned to go back and change it from first person to third person and put in qualifiers so the book would be historically accurate, but when I showed it to my agent and publisher, they both said to leave it as it is. By doing that, I crossed the line from nonfiction into fiction. But when I call it fiction it’s not because I tarted it up and tried to embellish things, but wanted to make it more readable, fluid, and immediate. I was trying to get as close to the truth as I could.

Q: How has your relationship with your mother changed in recent years?

A: Several years ago, the abandoned building on New York’s Lower East Side where Mom had been squatting for more than a decade caught fire and she was back on the streets again at age 72. I begged her to come live with me. She said Virginia was too boring, and besides, she's not a freeloader. I told her we could really use help with the horses, and she said she'd be right there. I get along great with Mom now. She's a hoot. She's always upbeat, and has a very different take on life than most people. She's a lot of fun to be around -- as long as you're not looking for her to take care of you. She doesn’t live in the house with us-- I have not reached that level of understanding and compassion-- but in an outbuilding about a hundred yards away. Mom is great with the animals, loves to sing and dance and ride horses, and is still painting like a fiend.

Q: What do you hope readers will gain from reading your books?

A:Since writing The Glass Castle, so many people have said to me, "Oh, you’re so strong and you’re so resilient, and I couldn’t do what you did." That’s very flattering, but it’s nonsense. Of course they’re as strong as I am. I just had the great fortune of having been tested. If we look at our ancestry, we all come from tough roots. And one of the ways to discover our toughness and our resiliency is to look back at where we come from. I hope people who read The Glass Castle and Half Broke Horses will come away with that. You know, "Gosh, I come from hearty stock. Maybe I’m tougher than I realize."

Jeannette Walls graduated from Barnard College and was a journalist in New York. Her memoir, The Glass Castle, has been a New York Times bestseller for more than six years. She is also the author of the instant New York Times bestsellers The Silver Star and Half Broke Horses, which was named one of the ten best books of 2009 by the editors of The New York Times Book Review. Walls lives in rural Virginia with her husband, the writer John Taylor.

1. The Glass Castle: A Memoir

2. The Glass Castle: A Memoir

Book Description Scribner, 2017. Soft cover. Condition: New. MORE THAN SEVEN YEARS ON THE NEW YORK TIMES BESTSELLER LIST The perennially bestselling, extraordinary, one-of-a-kind, nothing short of spectacular (Entertainment Weekly) memoir from one of the world s most gifted storytellers. The Glass Castle is a remarkable memoir of resilience and redemption, and a revelatory look into a family at once deeply dysfunctional and uniquely vibrant. When sober, Jeannette s brilliant and charismatic father captured his children s imagination, teaching them physics, geology, and how to embrace life fearlessly. But when he drank, he was dishonest and destructive. Her mother was a free spirit who abhorred the idea of domesticity and didn t want the responsibility of raising a family. The Walls children learned to take care of themselves. They fed, clothed, and protected one another, and eventually found their way to New York. Their parents followed them, choosing to be homeless even as their children prospered. The Glass Castle is truly astonishing a memoir permeated by the intense love of a peculiar but loyal family. Seller Inventory # ABE-1503342792114