Items related to The Jefferson Bible 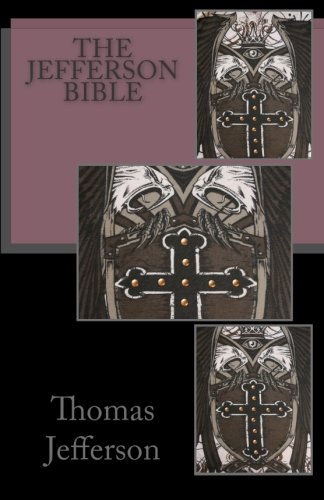 The Jefferson Bible, or The Life and Morals of Jesus of Nazareth as it is formally titled, was a book constructed by Thomas Jefferson in the latter years of his life by cutting and pasting with a razor and glue numerous sections from the New Testament as extractions of the doctrine of Jesus. Jefferson's condensed composition is especially notable for its exclusion of all miracles by Jesus and most mentions of the supernatural, including sections of the four gospels which contain the Resurrection and most other miracles, and passages indicating Jesus was divine. Jefferson cut and pasted his arrangement of selected verses from the King James Version[8] of the books of Matthew, Mark, Luke, and John in chronological order, putting together excerpts from one text to those of another in order to create a single narrative. Thus he begins with Luke 2 and Luke 3, then follows with Mark 1 and Matthew 3. He provides a record of which verses he selected and of the order in which he arranged them in his "Table of the Texts from the Evangelists employed in this Narrative and of the order of their arrangement". Consistent with his naturalistic outlook and intent, most supernatural events are not included in Jefferson's heavily edited compilation. Paul K. Conkin states that "For the teachings of Jesus he concentrated on his milder admonitions (the Sermon on the Mount) and his most memorable parables. What resulted is a reasonably coherent, but at places oddly truncated, biography. If necessary to exclude the miraculous, Jefferson would cut the text even in mid-verse." Historian Edwin Scott Gaustad explains, "If a moral lesson was embedded in a miracle, the lesson survived in Jeffersonian scripture, but the miracle did not. Even when this took some rather careful cutting with scissors or razor, Jefferson managed to maintain Jesus' role as a great moral teacher, not as a shaman or faith healer." Therefore The Life and Morals of Jesus of Nazareth begins with an account of Jesus’s birth without references to angels (at that time), genealogy, or prophecy. Miracles, references to the Trinity and the divinity of Jesus, and Jesus' resurrection are also absent from his collection. No supernatural acts of Christ are included at all in this regard, while the few things of a supernatural nature include receiving of the Holy Spirit, angels, Noah's Ark and the Great Flood, the Tribulation, the Second Coming, the resurrection of the dead, a future kingdom, and eternal life, Heaven, Hell and punishment in everlasting fire, the Devil, and the soldiers falling backwards to the ground in response to Jesus stating, "I am he." Rejecting the resurrection of Jesus, the work ends with the words: "Now, in the place where He was crucified, there was a garden; and in the garden a new sepulchre, wherein was never man yet laid. There laid they Jesus. And rolled a great stone to the door of the sepulchre, and departed." These words correspond to the ending of John 19 in the Bible. Thomas Jefferson (April 13 1743 – July 4, 1826) was an American Founding Father, the principal author of the Declaration of Independence (1776), and the third President of the United States (1801–1809). He was a spokesman for democracy, and embraced the principles of republicanism and the rights of the individual with worldwide influence. At the beginning of the American Revolution, he served in the Continental Congress, representing Virginia, and then served as a wartime Governor of Virginia (1779–1781). In May 1785, he became the United States Minister to France and later the first United States Secretary of State (1790–1793) serving under President George Washington. In opposition to Alexander Hamilton's Federalism, Jefferson and his close friend, James Madison, organized the Democratic-Republican Party, and later resigned from Washington's cabinet.

Akashic Books presents a thought-provoking series of early writings from United States Presidents, starting this season with George Washington, John Adams, and Thomas Jefferson, and moving chronologically forward. Each slim book offers an introduction and additional commentary by a groundbreaking contemporary writer. This series is unlike any other Presidential commentaries in print, and is characterized by a critical viewpoint that will provide a counterpoint to the more staid analyses that have traditionally accompanied Presidential writings.

Thomas Jefferson believed that the pure-principled teachings of Jesus should have been separated from the dogma and abuse of organized religion of the day. This led him to recast, by cutting and pasting from the gospels, a new narrative of the life and teachings of Jesus.