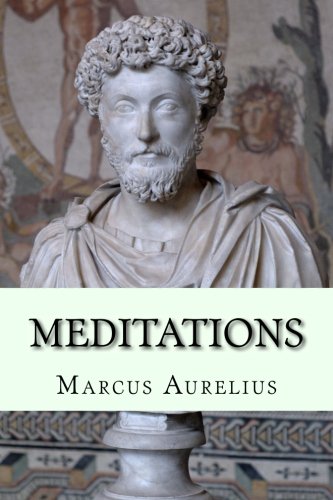 Meditations is a series of personal writings by Marcus Aurelius, Roman Emperor 161–180 CE, setting forth his ideas on Stoic philosophy.Marcus Aurelius wrote the 12 books of the Meditations in Koine Greek as a source for his own guidance and self-improvement. It is possible that large portions of the work were written at Sirmium, where he spent much time planning military campaigns from 170 to 180. Some of it was written while he was positioned at Aquincum on campaign in Pannonia, because internal notes tell us that the second book was written when he was campaigning against the Quadi on the river Granova (modern-day Hron) and the third book was written at Carnuntum. It is not clear that he ever intended the writings to be published, so the title Meditations is but one of several commonly assigned to the collection. These writings take the form of quotations varying in length from one sentence to long paragraphs.

About the Author:
Marcus Aurelius was born in 121 AD. He was the Roman emperor between 161 AD and 180 AD. His Meditations are our closest link to Ancient Stoicism and its practices.
George Long was an English scholar and translator in the early-to-mid-1800s. In addition to Meditations, his translation works include Plutarch s Lives as well as Discourses of Epictetus. He was an avid member of the Society for the Diffusion of Useful Knowledge and edited their quarterly magazine entitled Journal of Education.
Carolyn Gregoire is a senior writer at the Huffington Post. Her focus areas include human behavior, psychology, and neuroscience. Her work has been featured in the New Republic, Time magazine, Scientific American, among other publications. Additionally, she is the coauthor of the book Wired to Create. She lives in Brooklyn, New York.
"