Items related to Memoirs of A Professional Cad

Memoirs of A Professional Cad 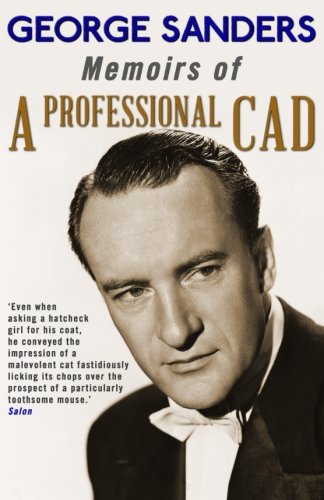 What might we dare to expect from an actor’s autobiography, even one from a star as personable as George Sanders? In the case of Memoirs of A Professional Cad, we possibly get more than we deserve. George Sanders undoubtedly led a colourful, glamorous and even action-packed life, spanning the peak years of Hollywood’s golden age. But the greatest joy of his memoirs is how funny they are, and how penetrating their author’s wit. Endlessly quotable, every chapter shows that the sardonic charm and intelligence he lent to the silver screen were not merely implied.

George’s early childhood was spent in Tsarist Russia, before he was obliged to flee with his family to England on the eve of the Russian Revolution. He survived two English boarding schools before seeking adventure in Chile and Argentina where he sold cigarettes and kept a pet ostrich in his apartment. We can only be grateful that George was eventually asked to leave South America following a duel of honour (very nearly to the death), and was forced to take up acting for a living instead.

Memoirs of A Professional Cad has much to say about Hollywood and the stars George Sanders worked with and befriended, not to mention the irrepressible Tsa Tsa Gabor who became his wife. But at heart it is less a conventional autobiography, and more a Machiavellian guide to life, and the art of living, from a man who knew a thing or two on the subject. So we are invited to share George’s thought-provoking views on women, friendship, the pros and cons of therapy, ageing, possessions, and the necessity of contrasts (Sanders’ maxim: ‘the more extreme the contrast, the fuller the life’).

Previously out of print for many decades, Memoirs of A Professional Cad stands today as one of the classic Hollywood memoirs, from one of its most original, enduring and inimitable stars.

'Even when asking a hatcheck girl for his coat, he conveyed the impression of a malevolent cat fastidiously licking its chops over the prospect of a particularly toothsome mouse.’ Salon

George Sanders was born in St Petersburg in 1906. He left Russia in 1917 with his family, who settled in England and had George educated at Bedales and Brighton College.

He made his British film debut in 1929, but it was in 1930’s Hollywood that he honed his distinctive, charming-yet-dangerous screen persona – the quintessential cad. Sanders co-starred in Alfred Hitchcock’s Rebecca and Foreign Correspondent (both 1940), and went on to win an Academy Award for his signature role, that of Addison DeWitt in All About Eve (1950). He continued to work in films up until the year of his death in 1972.

In the 1940’s, Sanders’ film-star status was the impetus for his two crime novels, both featuring recognizably Sanders-esque heroes: Crime on My Hands (1944) and Stranger at Home (1946). In 1960 came a third book: his autobiography, fittingly titled Memoirs of A Professional Cad in which the line between fiction and fact is blurred even more convincingly – and wittily – than in the novels. All three works are available as ebooks from Dean Street Press.