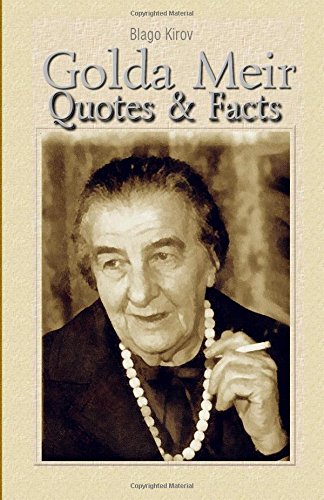 This book is an anthology of 61 quotes from Golda Meir and 60 selected facts about Golda Meir.   Golda Meir was the first female prime minister of Israel, and only the third woman to hold that office anywhere in the world. Golda Meir was issued Israel's first passport. Golda Mabovitch (Meir) was born on May 3, 1898, in Kiev, Russian Empire, present day Ukraine. In 1906, Meir's family immigrated to the U.S., ending up in Milwaukee. The family ran a grocery store, and young Meir was often put in charge of it. Golda made plans to go to high school, then on to college to become a teacher. But her parents objected, because in Milwaukee in 1913, teachers were not allowed to be married. Golda’s parents arranged a marriage for her to an older man. “It doesn’t pay to be too clever,” warned her father. “Men don’t like smart girls.” In the British Mandate of Palestine, Golda and her husband joined a kibbutz. Her duties included picking almonds, planting trees, working in the chicken coops, and running the kitchen. When Golda met with President Nixon, he told her that he would trade any three American generals for General Moshe Dayan. “Okay,” she said, “I’ll take General Motors, General Electric, and General Dynamics.” Because of her support for Ben-Gurion’s policy of swift retaliation against Arab attacks, Ben-Gurion claimed that Golda Meir was “the only man in my Cabinet.” Golda was amused that Ben-Gurion felt that this was the greatest possible compliment he could pay to a woman. “I doubt that any man would have been flattered if I had said about him that he as the only woman in the Cabinet,” Golda said.   “To be or not to be is not a question of compromise. Either you be or you don't be.” “A leader who doesn't hesitate before he sends his nation into battle is not fit to be a leader.” “Ability hits the mark where presumption overshoots and diffidence falls short.” “Above all, this country is our own. Nobody has to get up in the morning and worry what his neighbors think of him. Being a Jew is no problem here.” “America is a great country. It has many shortcomings, many social inequalities, and it’s tragic that the problem of the blacks wasn’t solved fifty or even a hundred years ago, but it’s still a great country, a country full of opportunities, of freedom! Does it seem nothing to you to be able to say what you like, even against the government, the Establishment? ” “At work, you think of the children you have left at home. At home, you think of the work you've left unfinished. Such a struggle is unleashed within yourself. Your heart is rent.” “Authority poisons everybody who takes authority on himself.” “Being seventy is not a sin.”