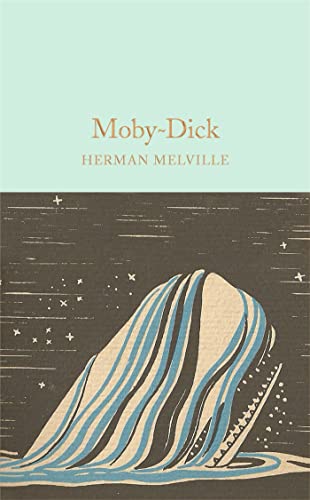 Teeming with ideas and imagery, and with its extraordinary intensity sustained by mischievous irony and moments of exquisite beauty, Moby-Dick is both a great American epic and a profoundly imaginative literary creation.

Part of the Macmillan Collector’s Library; a series of stunning, clothbound, pocket sized classics with gold foiled edges and ribbon markers. These beautiful books make perfect gifts or a treat for any book lover. This edition features an afterword by Nigel Cliff.

On board the whaling ship Pequod a crew of wise men and fools, renegades and seeming phantoms is hurled through treacherous seas by crazed Captain Ahab, a man hell-bent on hunting down the mythic White Whale. Herman Melville transforms the little world of the whale ship into a crucible where mankind's fears, faith and frailties are pitted against a relentless fate.

No American masterpiece casts quite as awesome a shadow as Melville's monumental Moby Dick. Mad Captain Ahab's quest for the White Whale is a timeless epic--a stirring tragedy of vengeance and obsession, a searing parable about humanity lost in a universe of moral ambiguity. It is the greatest sea story ever told. Far ahead of its own time, Moby Dick was largely misunderstood and unappreciated by Melville's contemporaries. Today, however, it is indisputably a classic. As D.H. Lawrence wrote, Moby Dick "commands a stillness in the soul, an awe . . . [It is] one of the strangest and most wonderful books in the world."