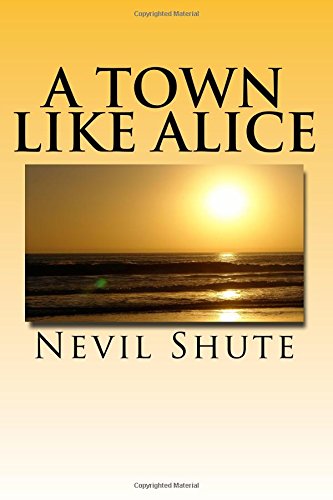 A Town Like Alice is an economic development and romance novel by Nevil Shute, published in 1950 when Shute had newly settled in Australia. Jean Paget, a young Englishwoman, becomes romantically interested in a fellow prisoner of World War II in Malaya, and after liberation emigrates to Australia to be with him, where she attempts, by investing her substantial financial inheritance, to generate economic prosperity in a small outback community — to turn it into "a town like Alice"

"A harrowing, exciting, and in the end very satisfying war romance."
HARPER'S
A TOWN LIKE ALICE tells of a young woman who miraculously survived a Japanese "death march" in World War II, and of an Australian soldier, also a prisoner of war, who offered to help her--even at the cost of his life....

Nevil Shute Norway was born on 17 January 1899 in Ealing, London.After attending the Dragon School and Shrewsbury School, he studied Engineering Science at Balliol College, Oxford. He worked as an aeronautical engineer and published his first novel, Marazan, in 1926. In 1931 he married Frances Mary Heaton and they went on to have two daughters. During the Second World War he joined the Royal Navy Volunteer Reserve where he worked on developing secret weapons. After the war he continued to write and settled in Australia where he lived until his death on 12 January 1960. His most celebrated novels include Pied Piper (1942), No Highway (1948), A Town Like Alice (1950) and On the Beach (1957).