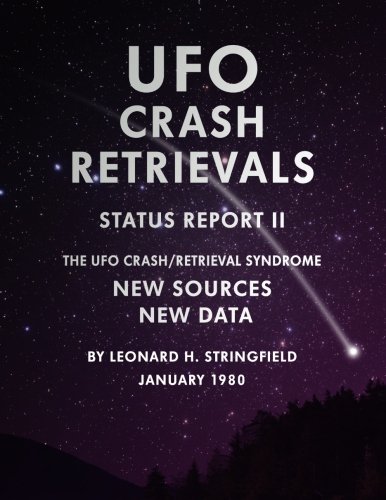 Leonard Stringfield was born in 1920. He was director of CRIFO (Civilian Research, Interplanetary Flying Objects) - one of the world's largest research groups during the mid-5Os, and publisher of its newsletter, ORBIT (1953-1957).

He also worked in cooperation with the United States Air Force (1953-1957), investigating and reporting UFO activity, having been assigned a special code number for reporting to the Air Defense Command in Columbus, Ohio.

For over 30 years, Stringfield served in several of the major UFO organizations in a public relations capacity. From 1957 to 1970, he was public relations adviser with the National Investigations Committee on Aerial Phenomena (NICAP). Later on, he was Director of Public Relations and a board member of the Mutual UFO Network (MUFON). He was also a regional investigator for the Center for UFO Studies, directed by Dr. J. Allen Hynek.

From 1967-1968 he served as Early Warning Coordinator for the University of Colarado UFO Project, screening UFO reports for possible scientific study.

Stringfield was also an advisor to Sir Eric Gairy, former Prime Minister of Grenada, 1977-78, during his efforts to establish a UFO research agency within the framework of the United Nations.

This is the second volume in Stringfield's influential 7-part "UFO Crash Retrieval Status Report" series, in which he lays the groundwork for the theories that made him famous. In looking at various UFO crashes throughout the U.S. in previous decades, Stringfield, the first researcher to exclusively focus on UFO crashes, shares many intriguing details about a number of major UFO cases.

This extremely rare volume has been lovingly reproduced exactly as it was first published 35 years ago. The material inside, which was shocking to many observers in those days, is finally gaining acceptance. Today, Stringfield's sober, objective research on crashes like Roswell and Kecksburg seems increasingly relevant. In a field filled with pretenders, Stringfield shines as the "real deal."