Items related to The Importance of Being Earnest

Wilde, Oscar The Importance of Being Earnest

The Importance of Being Earnest 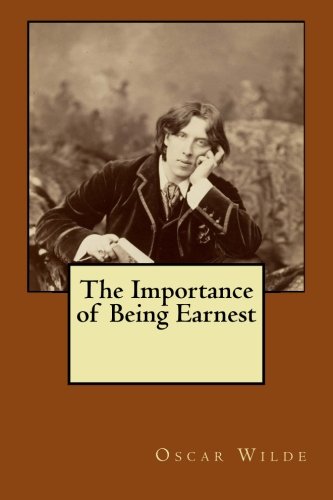 The Importance Of Being Earnest by Oscar Wilde is a wonderful comedy in which the protagonists uphold fictitious personć in order to escape burdensome social obligations. It is hailed as being one of the greatest plays of all-time by one of the worlds best loved authors. This is a classic, presented to you in its original form. A great addition to any book collection.

Webster’s paperbacks take advantage of the fact that classics are frequently assigned readings in English courses. By using a running English-to-Spanish thesaurus at the bottom of each page, this edition of The Importance of Being Earnest: A Trvial Comedy for Serious People by Oscar Wilde was edited for three audiences. The first includes Spanish-speaking students enrolled in an English Language Program (ELP), an English as a Foreign Language (EFL) program, an English as a Second Language Program (ESL), or in a TOEFL® or TOEIC® preparation program. The second audience includes English-speaking students enrolled in bilingual education programs or Spanish speakers enrolled in English speaking schools. The third audience consists of students who are actively building their vocabularies in Spanish in order to take foreign service, translation certification, Advanced Placement® (AP®) or similar examinations. By using the Webster's Spanish Thesaurus Edition when assigned for an English course, the reader can enrich their vocabulary in anticipation of an examination in Spanish or English. TOEFL®, TOEIC®, AP® and Advanced Placement® are trademarks of the Educational Testing Service which has neither reviewed nor endorsed this book. All rights reserved.

Oscar Wilde (1854 1900) was born and raised in Dublin, Ireland. Wilde studied at Trinity College in Dublin and at Magdalen College in Oxford, England, before settling down in London and having a long, successful career as a poet, playwright, and author. Wilde is best known for his novel The Picture of Dorian Gray and for his satirical play The Importance of Being Earnest.

1. The Importance of Being Earnest

Shipping: US$ 13.85
From United Kingdom to U.S.A.
Destination, rates & speeds