Firth, C. H. Oliver Cromwell and the Rule of the Puritans in England 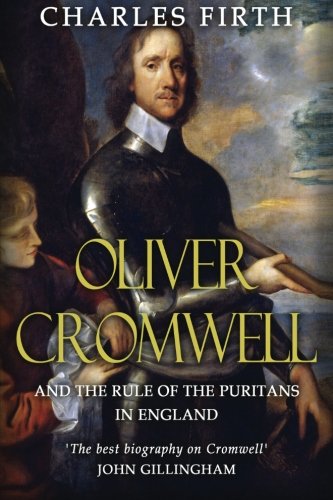 Sir Charles Firth’s biography of Oliver Cromwell portrays a man who was ‘both soldier and statesman in one’, a man of ‘a large-hearted, expansive vigorous nature’, one who always invokes the might of God to explain his very human acts of revenge and justice.

Frith describes the years which led to Cromwell seizing power. These years included the rise and fall of megalomaniac King Charles I, meetings of the Long Parliaments of the 1640s and the discussions concerning the newer ideas in English Christianity (Presbyterianism, Calvinism and so forth). Then came the Puritan rebellion against Charles following their Nineteen Propositions of 1642.

Throughout the 1640s and 1650s the Royalists, fighting on behalf of the King, were engaged in fighting with the Puritans, and Firth gives excellent and vivid descriptions of battle based on first-hand accounts. Assisted by the Scottish Army, the Battle of Marston Moor was a key point in the conflict, where Cromwell gained the nickname ‘Ironsides’ from his followers and ‘Lord of the Fens’ from his opponents due to his support of the rights of peasants.

In 1648 he joined the army to quell any outbreak of civil war and anarchy, persuading the soldiers to side with him and Parliament. He also formulated ‘The Agreement of the People’.

Then Ireland rose up against its Parliament, leading to Cromwell’s attempt to convert the nation to Protestantism, and England went to war with Scotland and the Netherlands.

After the execution of Charles I in 1649, Cromwell was placed at the head of the English Republic, ‘a perpetual Parliament always sitting’, which became the Little Parliament within a few years. Opposed to him were the Levellers and Presbyterians, which shows that the events had both a political and religious dimension. He also gave kindness to the Quakers and formed an alliance with France against Spain in a move that was much criticised in the years that followed.

Cromwell initially wanted to incorporate the army into how England was governed, but by 1653 civilian rule had been restored. Cromwell was given the title of Protector and set about promoting the separation of powers within government and the reform of law and the English courts system.

He also encouraged education and scholarship, which were linked with his own religious ideals to unite the branches of the English church, and hoped to secure England’s commercial and religious interests within Europe and the colonies.

Right up to his death in 1660, argues Firth in a wide-ranging and brilliant study of Puritanism and the man who stood at its head, no man exerted more influence on the religious development of England.

Charles Firth (1857-1936) was Regius Professor of Modern History at Oxford University and president of the Royal Historical Society. His works concerned seventeenth-century England and included Scotland and the Commonwealth.

Albion Press is an imprint of Endeavour Press, the UK's leading independent digital publisher. For more information on our titles please sign up to our newsletter at www.endeavourpress.com. Each week you will receive updates on free and discounted ebooks. Follow us on Twitter: @EndeavourPress and on Facebook via http://on.fb.me/1HweQV7. We are always interested in hearing from our readers. Endeavour Press believes that the future is now.

Book Description Condition: Good. Condition Good: Comment: Book is used and in good condition with some wear from use. This may include stickers on cover, wear to dustcover/missing dustcover, inside cover, spine, some highlighting or writing in book, slight curled corners, stains, and wear to the fore edge. All orders ship via UPS Mail Innovations. Thank you for shopping with Goodwill Industries of the Inland Northwest - changing lives through the cycle for good. Seller Inventory # 4J2MCZ0011IU