Items related to Precalculus: An Investigation of Functions

Precalculus: An Investigation of Functions 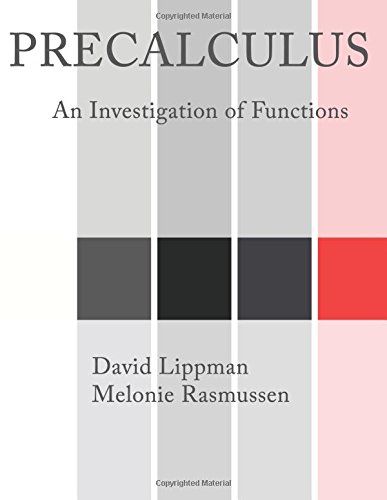 In writing this book, the authors placed focus was on the story of functions. Beginning with function notation, a basic toolkit of functions, and the basic operation with functions: composition and transformation. Building from these basic functions, as each new family of functions is introduced the text explore the important features of the function: its graph, domain and range, intercepts, and asymptotes. The exploration then moves to evaluating and solving equations involving the function, finding inverses, and culminates with modeling using the function.

David Lippman received his master’s degree in mathematics from Western Washington University and has been teaching at Pierce College since Fall 2000. Melonie Rasmussen also received her master’s degree in mathematics from Western Washington University and has been teaching at Pierce College since Fall 2002. Prior to this Melonie taught for the Puyallup School district for 6 years after receiving her teaching credentials from Pacific Lutheran University. We have both been long time advocates of open learning, open materials, and basically any idea that will reduce the cost of education for students. It started by supporting the college’s calculator rental program, and running a book loan scholarship program. Eventually the frustration with the escalating costs of commercial text books and the online homework systems that charged for access led them to take action. First, David developed IMathAS, open source online math homework software that runs WAMAP.org and MyOpenMath.com. Through this platform, we became integral parts of a vibrant sharing and learning community of teachers from around Washington State that support and contribute to WAMAP. Our pioneering efforts, supported by dozens of other dedicated faculty and financial support from the Transition Math Project, have led to a system used by thousands of students every quarter, saving hundreds of thousands of dollars over comparable commercial offerings. David continued further and wrote his first open textbook, Math in Society, a math for liberal arts majors book, after being frustrated by students having to pay $100+ for a textbook for a terminal course. Together, frustrated by both cost and the style of commercial texts, we began writing PreCalculus: An Investigation of Functions in 2010.