Casas, Bartolomé De Las A Short Account of the Destruction of the Indies 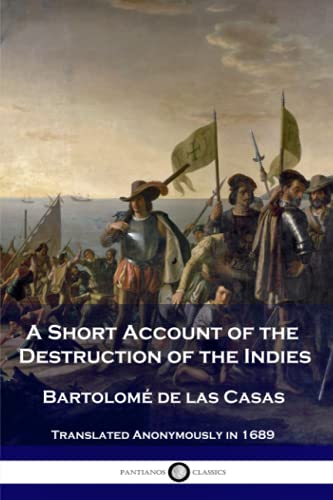 Bartolomé's eye-opening account of Spanish colonialism in the early to mid-16th century has for centuries been a pivotal source on the topic.

Following the discovery of the Americas by Christopher Columbus in 1497, a great interest in the new and virgin lands was sparked in Europe. Spain, eager to capitalise on the great resources and wealth present, sent successive fleets of vessels to the Caribbean to set up colonial outposts as footholds in the new continent.

Despite being small in number, the Spanish colonists had superior arms and were able to forcibly subdue the native populations. Murder, rape and other atrocities were commonplace in the process, with many natives afterwards becoming enslaved. While wealth was amassed, the moral depravity involved would appal the socially conscious at home.

Bartolomé de las Casas, a friar who intensely opposed such inhumane behavior, was moved to author his account of the colonial era, which he defined by a succession of harms inflicted on native peoples. For his part, Las Casas would assume place as a dogged defender of West Indian peoples, putting pressure on the Spanish court to enact laws protecting native welfare.

Bartolome de las Casas was born in Seville around 1484. At the age of eighteen he left for the New World, where he participated in the conquest of Cuba and witnessed the first full-scale massacre of an Indian community. He became a priest and entered the Dominican order. He dedicated himself to the protection and defence of the Indians. Anthony Pagden teaches in the Department of History at John Hopkins University, Baltimore. He is the author of The Fall of Natural Man and Spanish Imperialism and the Political Imagination. Nigel Griffin read modern languages at Oxford and was a Fellow of New College in the 1970s. He now concentrates on writing and translating and has worked for both the UN and the World Bank.

1. A Short Account of the Destruction of the Indies