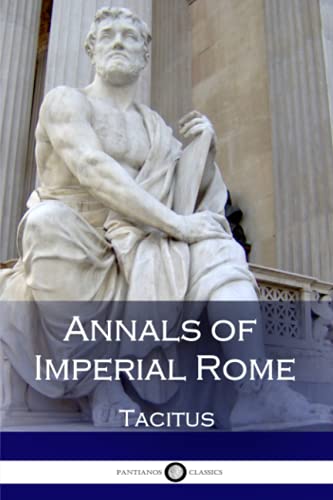 The Annals of Imperial Rome, a classical history by Cornelius Tacitus, chronicles the period between the reign of the Emperors Tiberius and Nero.

Divided into sixteen books, some of which were partially or entirely lost over time, the Annals narrate sequentially the various events and deeds of two rulers of the Roman Empire. Long considered a valuable source, the Annals provide insight into the workings of the Roman Empire and how its Emperors interacted with the democratically elected Senate and other arms of the bureaucracy.

Modern scholars of antiquity hold the belief that Tacitus, as a serving Roman Senator, had access to the Acta Senatus - a record of lawmaking procedures - as a source for this work. As such, the reliability of the Annals is generally thought strong compared against other, more corrupted histories of the Roman Empire.

Tacitus had low opinions of both Tiberius and Nero. Both worked to sew fear within the general population, or plebiscite, as well as in the higher echelons of Roman society. Tacitus supports his beliefs by narrating various episodes in their respective rules, and is careful to make a distinction between Tiberius - whom he considers to have once been a truly great man, fallen from grace - and Nero, whom he thought an innately despotic man prone to compulsive acts.

This edition of the Annals contains the respected, classic translations by Alfred John Church and William Jackson Brodbribb, two scholars of the classical period whose knowledge and ability continues to be held in wide regard by scholars and general readers alike.