Items related to The Doctor's Apprentice: A Barkerville Mystery

The Doctor's Apprentice: A Barkerville Mystery 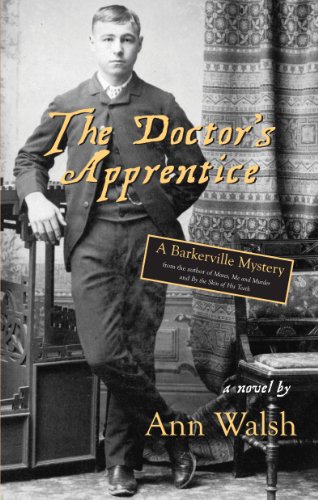 Short-listed for the 1999 Sheila A. Egoff Award for Children’s Literature and Geoffrey Bilson Award

Ann Walsh’s sequel to Moses, Me and Murder (Pacific Educational Press) continues the adventures of Ted, now 14. Still tormented by the ghost of murderer James barry, Ted apprentices to the eccentric doctor J.B. Wilkinson, whose dependency on opium for his patients and for his own demons reveals a past intertwined with the life and death of an enigmatic woman named sophia Cameron.

At the height of the gold rush in 1868 Barkerville, B.C., Ted, tormented by nightmares of a murderer he helped to convict, apprentices himself to an eccentric country doctor.

Ann Walsh is the author of thirteen books for young people. She is a winner of the Canadian Children’s Book Centre Our Choice Award, the Forest of Reading Golden Oak Award, and was a Canadian Library Association Notable selection. She was also shortlisted for the Forest of Reading Silver Birch Award and the B.C. Book Prize. She lives in Victoria, B.C.

1. The Doctor's Apprentice (A Barkerville Myster)