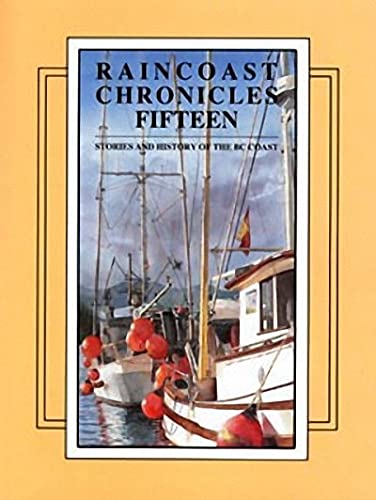 A cornucopia of coast history - Saturna Island in the old days, One-Arm Willy and the tattooed lady and the strong man, Dr. Darby at Bella Bella, how telephone communication came to the rugged BC coast, stories of bears and the Union Steamships, and much more.

Howard White was born in 1945 in Abbotsford, British Columbia. He was raised in a series of camps and settlements on the BC coast and never got over it. He is still to be found stuck barnacle-like to the shore at Pender Harbour, BC. He started Raincoast Chronicles and Harbour Publishing in the early 1970s and his own books include A Hard Man to Beat (bio), The Men There Were Then (poems), Spilsbury's Coast (bio), The Accidental Airline (bio), Patrick and the Backhoe (childrens'), Writing in the Rain (anthology) and The Sunshine Coast (travel). He was awarded the Canadian Historical Association's Career Award for Regional History in 1989. In 2000, he completed a ten-year project, The Encyclopedia of British Columbia. He has been awarded the Order of BC, the Canadian Historical Association's Career Award for Regional History, the Stephen Leacock Medal for Humour, the Jim Douglas Publisher of the Year Award and a Honorary Doctorate of Laws Degree from the University of Victoria. In 2007, White was made an Officer of the Order of Canada. He has twice been runner-up in the Whisky Slough Putty Man Triathlon.

GRIZZLY BEAR GUIDING WAS GOOD business. I make a good living grizzly bear guiding. Get a new pickup truck every two years. Make a lot of good friends from all over. Americans and Germans. They give me lots of free gifts. Lots of things. Knives, guns, flares, rain gear, gumboots, clothes. I had about twenty rifles given to me, altogether, all my time guiding.

I see over three hundred grizzly bears get killed. I only shot the ones that tried to kill me or the wounded ones, that's all.

Once I got a guide licence, I could hire anybody I want. One year, around May, a bunch came in for a grizzly bear spring hunt. From Oklahoma. A grizzly bear nearly get me that first time. He hit me on the foot, tried to grab me. This was up Kwatna. We shot that grizzly bear on the tideflat, and he went up the mountain. One of the hunters was a millionaire, oil guy, Oklahoma oilman. This was the guy who shot the grizzly bear. I went and followed that bear's track and caught up to him and he charged us. So I shot, hit his front leg; kind of slow him down but he came, came again.

The hunter said, "Don't shoot. Let me finish him off.'"

He start shooting and the bear keep coming. The bear went down. I got a stick and poked him in the lip, poked that grizzly bear in the mouth. He bite that stick, chop it in half like an axe. And he still breathing. Every time he turn his head I cat) see the steam, like, coming out of his nose.

"Quick, shoot him, finish him off. Shoot right In the neck behind the head," I said.

Bang! He shot him.

"I think he's dead," I said. "I think he's finished now." And I kick that bear in the ass end, kick it with my gumboots He turned around and slapped me right on the toe, broke my toe. Then he fell down dead. Tough animal, that grizzly bear.

I was hunting in Owikeno Lake with three brothers. American boys. We came across the lake and I saw grizzly bear walking on the tide flats. At the Tzeo River, in that Washwash River country.

I took this kid, the youngest of the brothers. I was walking ahead of him and I saw a grizzly bear coming. A big one. Big grizzly bear! I stopped right away as soon as I saw it. "See that big grizzly bear coming?" I said. I stopped, never moved, just stand still. And there was a little baby grizzly coming behind her. I said, "Jack, it's a sow grizzly bear. Female. We don't shoot them. She's got a little baby. We can't shoot 'em. If we shoot the mother the wolves will kill the baby. They'll eat it up. That baby grizzly going to be sick for a long time, if he has no mother. Don't shoot her," I said. "Let 'em go."

So I stood in front of that grizzly bear and said, "Go on, beat it. Go on, bug off," I said. "I got a big gun, you don't want to get killed." The bear stopped and looked at me. She was about thirty feet away. She took off, took her little kid up a bank right into the heavy timber.

I said, "Let's go around, go circle around, hit the other creek. Get away from that cranky son-ofa-gun." Just as we started walking down to cut across to another creek we heard a stick breaking in the woods. "She's here already," I said. "She's on her way to the top of that bank. She try and run away too." I turned around to go back. I didn't know that it was a different bear, that one we heard on top of the bank breaking sticks.

Just as I started walking down the Washwash River, right where she turn around and went in the woods, that big grizzly bear sow, she came out of the woods. Full gallop. Not with her cub this time. She take that cub and hide it in the woods and come back herself. She started snorting, I grab a rock and throw it right in front of her. It hit the water. She stood up on her hind feet. And I keep yelling at her, "Go on." That hunter was pointing his gun all the time. "It's all right," I said. "Don't shoot. Let me do the work," I said.

The bear keep coming toward me. She was gettin' pretty close now. I kneel down and I use my boy's gun. It's a big gun, .300 Winchester magnum. Big shells in it. I shot between the front legs. Hit the ground so the rocks will spray up into her stomach and make her run away. So I shot but the son-of-a-gun never, she never run away. Just keep coming. And I try and load again. If she makes one jump she'll reach me I thought. This time I going to shoot it in the head. I aim right between the eyes, like. Bang! I missed. I just burn the side of her head, one side. That bear come right after me. Jump, run and hit me on the side, left side. Threw me about twenty feet. She didn't slap me. I think she used her head. Run and hook me with her head like a cow, like a bull cow. That bear throw me quite a ways. I landed right
on my back.

I had too much stuff on my neck; I had binoculars, a camera, walkie-talkie and the big rifle. Too much in the way, like, I couldn't recover quick. I try to reload but she got me. She came, came right on top of me. I Jay there, never move. Just keep still. She step on my one shoulder little bit with one foot, and she step on the other shoulder with the other foot. Put her nose right in my face. Kind of smell me, snorting, like. Saliva coming out of her mouth. I can smell that old rotten fish breath!

That hunter was kneeling down aiming at the bear. He shoot, bang! I hear that gun. She never bite me, I thought she was going to bite me right in the face. Funny, it don't bite. I don't know why it didn't bite. Then the blood came down. That young hunter, he shot right high in the neck, right on top of the neck. Cut the skin. And the blood drip all over my face and my chest. I can turn my head a little bit to watch that young hunter. He was aiming again. "Try and hit him in the ribs," I told him. "Shoot him right through the ribs, right through the lungs." He shot again, bang! and more blood came. Then the bear lay right on top of me. All that weight drop on top of me. Weigh about six hundred pounds. She just lay there, I couldn't move. She lay right on top of me, dead now. Blood just pouring out.

"Now, Jack, how you going to get me out?" I asked. "This son-of-a-gun weigh about a thousand pounds," I said. That young hunter try and move that bear off me but he can't do it. "Leave it for a little while maybe," I said.

He asked me if I can stand it.

"Then leave this grizzly bear on me for ten minutes, maybe. Maybe it will get stiffened up, easier to roll it off then," I said. After a while I can feel it, that the bear startin' to get lighter. I get used to it maybe, get used to the weight on me. "Okay, push it, roll it to the right side," I said. By God, it rolled off. I get out of there quick. Blood all over my face.

We went to meet the other boys. "Bear got you, huh?" they ask.

2. Raincoast Chronicles Fifteen: Stories and History of the B. C. Coast

5. Raincoast Chronicles Fifteen: Stories and History of the BC Coast.