Items related to Ships of Steel: A British Columbia Shipbuilder's... 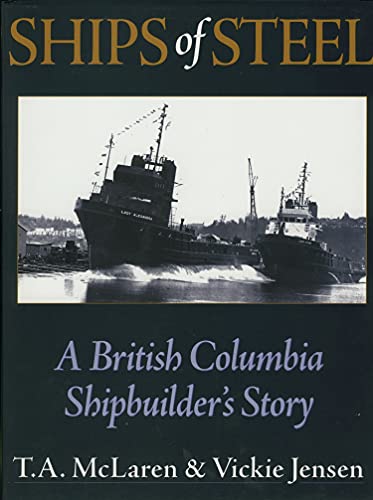 A century ago, the steel ships working coastal waters were built elsewhere. Gradually marine engineers began migrating to the coast with their families, and the BC industry got underway.

Ships of Steel chronicles that industry from the early development of steel construction facilities, equipment and qualified personnel; to the World War II boom when BC yards delivered two 10,000-ton freighters every week; to the postwar production of tugs, barges, fish boats and sophisticated supply vessels; to the present day.

The heart of the story is a half-century's worth of observations and recollections by Arthur McLaren (1919-99), a natural storyteller who owned and ran Allied Shipbuilders for 50 years and who knew the business inside out. This invaluable oral history is presented in the context of an engaging, readable history of the industry by Vickie Jensen, a marine writer who was a friend of Arthur McLaren. Also included are anecdotal and technical information from McLaren's archives, memories from his colleagues, and provincial steel shipbuilding statistics and photographs published here for the first time. Ships of Steel is a behind-the-scenes look at a coastal shipyard, an invaluable piece of BC maritime and industrial history, and a tribute to the skill, determination and ingenuity of BC's shipbuilding crews.

Thomas Arthur McLaren (1919-99) was the son of Scottish shipbuilder William Dick McLaren, who, in search of new opportunities, brought his family to Vancouver, British Columbia, in 1928. WD became managing director of West Coast Shipbuilders, established on False Creek at the outbreak of World War II. Arthur joined the company in 1941 after graduating in mechanical engineering from the University of BC. He had always wanted to build ships, and in 1948 he launched his own company, Allied Builders (later renamed Allied Shipbuilders Ltd.)-against the advice of his father, who suggested a business with "more future." Over the next half century Arthur went on to build more than 250 vessels, always leading by the example of common sense, honesty and hard work. He served as president of the Association of Professional Engineers of BC and was a fellow of both the Society of Naval Architect & Marine Engineers and the Royal Institution of Naval Architects, among other professional and public activities. He and his wife Dorothy raised three sons, James, Douglas and Malcolm, who continue with Allied Shipbuilders.

The Early Ships
The area now known as British Columbia was one of the last regions of North America to be settled by Europeans. British and Spanish navigators visited the area late in the eighteenth century, but it wasn't until 1843 that the Hudson's Bay Company set up trading forts and established what is now the city of Victoria. Even then, the outpost was still considered one of the most remote. It was a British possession, thousands of sea miles from London, a continent away from British colonies in eastern Canada, with no means of transcontinental communication.

If the fur trade opened the northwest coast to trading, it was the California gold rush that later triggered development of BC. After gold was discovered on the Fraser River in 1857, hordes of miners and settlers who had moved to California flocked northward to what is now British Columbia. Steamship links between San Francisco and Victoria were established, and when the American Transcontinental Railroad was opened in 1869, there was easier access to western North America via San Francisco. The demand for transportation up the Fraser River to the goldfields was enough to spark the establishment of shipyards in Victoria
where a few shallow-draft sternwheel steamers were built. Meanwhile rich seams of coal had been found on Vancouver Island, which along with timber gave rise to a brisk export business. By the 1870s, ships were being chartered to carry coal to San Francisco, and before long, machine shops began to appear on Vancouver Island.

Development of BC began in earnest with the completion of the transcontinental Canadian Pacific Railway in 1885. The history of BC?s shipbuilding industry be ins at about the same time, 91 when the rail line Joining the two Canadian coasts made for easier transport of steel and machinery to west coast shipyards. In 1865 the Royal Navy established a base at Esquimalt, adjacent to Victoria, and the Canadian government built a graving dock there during the 1880s. This was the first local facility capable of drydocking medium-sized ships. Although the dock was part of the Esquimalt naval base, commercial drydocking and repairs were undertaken by outside contractors.

In the 1890s a number of wooden vessels were built for coastal service, but most were constructed in the Puget Sound or San Francisco Bay areas. New sternwheel steamers began operating on four large lakes in BCs interior, linking railway branch lines with developing mines and farms.

Reports of a fabulous gold strike in the Klondike in 1897 brought a second influx of miners, all determined to secure passage on any craft heading north to the goldfields. The Union steamships, beginning with the Capilano, seized on the opportunity and entered into Alaskan service. Of the thousands of miners, speculators, merchants, entertainers and others who poured into BC from all directions to find gold, many stayed and settled in the province.

In 1914 Sir Alfred Yarrow, naval shipbuilder of the Clyde, bought the Victoria shipyard known as BC Marine Railway Company and renamed it Yarrows Ltd., thus establishing a branch of his family business in Esquimalt. The opening of the Panama Canal in 1915 brought more ships to western North America.
The Beginnings of an Industry

The fledgling economy of BC was strongly tied to the forest and fishing industries, both of which required marine transportation. The early working vessels were made of wood and evolved to fit the needs of these resource industries. From the 1880s most logging was done along coastal inlets so that logs could easily be rafted into flat booms and towed to various sawmills. A distinctive type of tugboat developed to do this work: a wooden vessel, generally 60 to 80 feet in length, fitted with a single coal-fired Scotch boiler and a compound or triple expansion engine of 150 to 350 ihp. Although the first of these vessels dates back to 1889, in the early 1900s scores of utility steam tugs were launched. The developing fishing industry had its own requirements, 'ust as specific. By 19 1 0 some eighty canneries were operating up and down the coast. Fishing companies owned thousands of open wooden boats 25 to 30 feet in length, each outfitted with oars and a lug sail. A fisherman was allotted a boat and fished on a share basis. With the introduction of the gasoline engine, mainly fishermen saved up and acquired their own "gas boats."

Whether for forestry or fishing, all vessels tended to be small and built of wood. Timber was plentiful. The total construction time for some -was often only one month-from tree to completed boat. Using green wood shortened the lifespan of these vessels, whereas tugs built of well-seasoned timber could be expected to last fifty years. For larger, ocean-going service, steel ships were the obvious choice.

The first new steel ships used on the BC coast were built in the United Kingdom, although some were sent to BC for re-erection. In 1891 the first steel steamers for the Union Steamship Company of British Columbia were built at Paisley, Scotland, and knocked down for shipment to Vancouver. They were then re-erected, launched and put into service as the sister ships Comox, Capilano and Coquitlam. These three small steel steamers are often cited as the first metal ships built in BC. However, marine historian and shipbuilder Rollie Webb says this honour should go to the Alice, which was brought out in sections from England in 1851. He quotes a letter he received from the late marine writer Norman Hacking, a Employees of J. Coughlan & Sons shipyard, in front of the company's buildings at 1 st & Columbia at the southeast corner of few days after lecturing at the Vancouver Maritime Museum: Apropos of your talk on Saturday, the little iron schooner Alice was brought out from England in sections in the ship Tory and arrived at Victoria i . n 1851, and was the first vessel on the Victoria registry. Her certificate states that she was of 45 tons and had "one deck, two mast, standing bowsprit, shield head and iron built. "

The Alice was brought out from England by Capt. James Cooper who bad been master of several Hudson's Bay Company vessels from 1844 to 1850, when he returned to England in command of the barque Columbia. He attempted unsuccesfully to organize the Vancouver Island Steam Sawing Mill and Agriculture Company, and when this scheme was abandoned came out to Vancouver Island as an independent settler

I have seen no record of bow be managed to put the Alice together, but she was not successful financially, as he ran up against the Hudson @ Bay Co. trade monopoly. She made at least one voyage to San Francisco with lumber and one or two to the Hawaiian Islands where presumably Cooper sold her, for she disappeared from the records.
1900-1910: The Industry Takes Root

In 1901, the first of the Canadian Pacific highclass steamers arrived from Newcastle for tri-city service between Vancouver-Victoria-Seattle. The Princess Victoria was the forerunner of the famous Princess fleet, which served the BC coast for three-quarters of a century. Establishment of the Grand Trunk Pacific Railway fleet provided a link between Vancouver and the Grand Trunk Rail terminal at Prince Rupert. The fleet of the Union Steamship Company, founded in 1889, carried

freight and passengers to remote logging camps, fish canneries and small settlements all along the Inside Passage. At its peak, the com@any served more than 200 ports of call.

Although these new foreign-built ships did not directly assist the BC shipbuilding industry, the delivery of these vessels brought out scores of marine engineers, who then sent for their families and settled in Vancouver and Victoria. Many local families trace their origins in BC to the Empress of Asz'a, Princess Charlotte, Prince George, Lady Cynthia and other ships delivered to this coast nearly a century ago. (Introduction)