Items related to Double Blue: An Illustrated History of the Toronto...

Double Blue: An Illustrated History of the Toronto Argonauts

Double Blue: An Illustrated History of the Toronto Argonauts 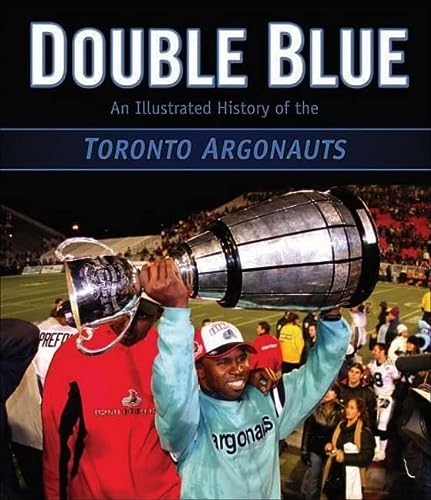 ?The Toronto Argonauts have been a beloved football team since its beginnings in 1873, when players first donned the double blue uniforms (so popular, blue was adopted by other Toronto sports teams). The oldest professional sports team in North America with the same name since inception, the Boatmen have rewarded their fans with 15 Grey Cup titles. This is a book for these fans. Presented in full colour with photos throughout, here are many stories from players, coaches, and other people connected with the team. Dozens of interviews with key Argonauts, past and present, are an integral part of the research being done specifically for this book. Journalists who have followed the Argos will contribute special pieces on important aspects. The fans will tell their stories, show off their photos and memorabilia. A history will highlight the triumphs from each year, as well as the prominent players, the venues, the changes to the game and the league, and so on. Rounding out the book are profiles of key Argonauts, with photos, stats, and a section on Where Are They Now?” Plus there will be highlights on turning points the moments in Argos games that made the difference in a season. This book is a must for any fan of Canadian football.

Jim O'Leary is a founding partner of Sport Media Enterprises, a Toronto company that specializes in sports publishing and sports photo marketing. He is a former editor of the "Sunday Sun." In 1996 he helped launch Canoe.ca which today ranks among Canada's largest news and information web sites. Wayne Parrish is a National Newspaper award-winning sports journalist, having worked for the "Toronto Star" and as sports editor for the "Toronto Sun." He also champions the art of sports photography through the Sports Gallery in Toronto's Distillery District.

1. Double Blue: An Illustrated History of the Toronto Argonauts