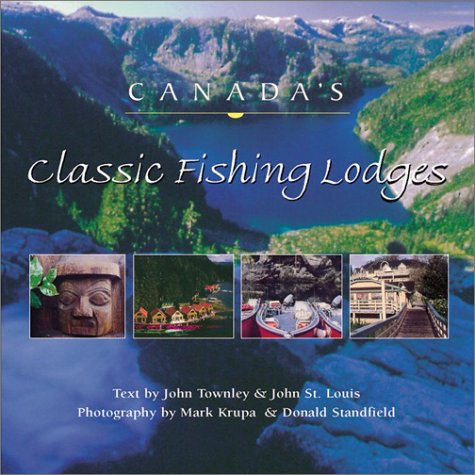 A photographic tour of sportfishing's most alluring destinations.

Canada's Classic Fishing Lodges visits every angler's northern dream destinations, from British Columbia's mystical Queen Charlotte Islands to the rustic, unspoiled reaches of Labrador's Eagle River. These are truly some of the finest fishing lodges in a country known for its exceptional angling opportunities.

Whether you are planning the ultimate fishing trip, looking to fuel your dreams with vicarious casts in spectacular locales, or just searching for the perfect gift for the angler in your life, this is an unprecedented guide to Canada's top lodges.

John Townley has fished on five continents, from Scotland to New Zealand and Chile to South Africa.

Don Standfield is the co-author of Stories from the Bowseat and Algonquin. He is a frequent contributor to books and outdoors magazines.

The pursuit of worthy adversaries takes many fishermen to the last frontiers of wilderness. This is one of our sport's many blessings, the opportunity to escape the ordinary, to venture to distant locales and unfamiliar waters. Canada abounds with such opportunities and remains an enticing playground for those drawn to dramatic natural beauty and abundant wildlife. North of its major cities, Canada's waters, rock, trees and ice conspire against civilization, from the Pacific to the Atlantic to the Arctic. Scattered amid this daunting labyrinth of forests, glacial lakes and wild rivers are many of the finest fishing lodges in the world, most dedicated to providing action and indulgence in equal measure.

Each of the lodges featured in this book is a tribute to Canada's bountiful sport-fishing heritage, as are the lodge owners themselves, most of whom have surmounted huge challenges to forge these angling shrines. Their reputations for excellence echo around the world. This book celebrates seventeen of Canada's finest fishing lodges, their pioneers, and those who carry the torch today. We hope that it will also convey a sense of the magnificent scenery, the freedom, the warm camaraderie, and the phenomenal fishing that can be experienced at these establishments.

The lodges are presented for the reader in no particular order. They are not arranged geographically, by lodge size or fish species. Can a feisty Chinook outrank a monster pike, a tenacious steelhead or an energetic brookie? Can the legendary Miramichi River give more pleasure than rustic, far-northern Great Slave Lake or the west coast's exotic Queen Charlotte Islands? They each call to us with their extraordinary singular allure.

Researching and writing this book was the stuff that dreams are made of -- arguably one of the most enjoyable sporting assignments ever. For two men whose love of fishing began with catching rock bass off a dock in Ontario's Muskoka lake district, the five months spent visiting these seventeen fishing lodges, in seven provinces and two territories across Canada, was almost too idyllic. Several lifetimes worth of trophy fish, helicopter and floatplane trips, river-rafting, singlemalt scotch and stellar shore lunches spoiled us rotten. So much hospitality, so many friendships and wonderful memories. It was an incredible privilege that we shall never forget.