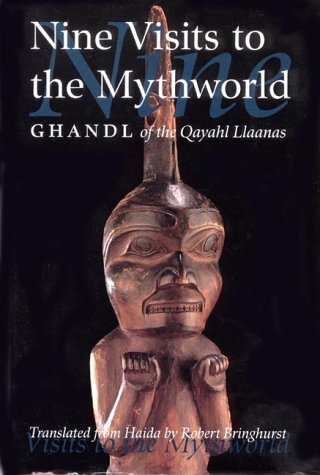 In the Fall of 1900, a young American anthropologist named John Swanton arrived in the Haida country, on the Northwest Coast of North America, intending to learn everything he could about Haida mythology. He spent the next ten months phonetically transcribing several thousand pages of myths, stories, histories and songs in the Haida language. Swanton met a number of fine mythtellers during his year in the Haida country. Each had his own style and his own repertoire. Two of them -- a blind man in his fifties by the name of Ghandl, and a crippled septuagenarian named Skaay -- were artists of extraordinary stature, revered in their own communities and admired ever since by the few specialists aware of their great legacy.

Nine Visits to the Mythworld includes all the finest works of one of these master mythtellers. In November 1900, when Ghandl dictated these nine stories, the Haida world lay in ruins. Wave upon wave of smallpox and other diseases, rapacious commercial exploitation by fur traders, whalers and miners, and relentless missionization by the church had taken a huge toll on Haida culture. Yet in the blind poetď??s mind, the great tradition lived, and in his voice it comes alive. Robert Bringhurstď??s eloquent and vivid translations of these works are supplemented by explanatory notes that supply the needed background information, and by photographs of masterworks of Haida visual art, in which the stories Ghandl tells are given potent visual form.

Robert Bringhurst is one of Canada's most respected poets and most probing cultural historians. He has been a Guggenheim Fellow, lectured on Native American art and oral literature at universities around the world, studied linguistics at MIT under Noam Chomsky in the 1960s, and worked as a professional translator for Arabic and Greek. Bringhurst began to study the Haida language in 1982. His translations of Haida oral poetry have since appeared in major scholarly journals and in Brian Swann's groundbreaking anthology Coming to Light: Contemporary Translations of the Native Literatures of North America.

Book Description Condition: Good. A+ Customer service! Satisfaction Guaranteed! Book is in Used-Good condition. Pages and cover are clean and intact. Used items may not include supplementary materials such as CDs or access codes. May show signs of minor shelf wear and contain limited notes and highlighting. Seller Inventory # 1550548034-2-4

Book Description Hardcover. Condition: As New. Dust Jacket Condition: As New. First printing of the assumed first edition. 8vo. 222 pages. Illustrated. Photo-illustrated endpapers. Appendix. Notes to the Text. Notes to the Illustrations. Select Bibliography. Cased in red and black paper-covered boards. No signs of previous ownership. Not a library discard. A bright copy in as-new condition in like dust jacket. This is Volume 2 in the publisher's series "Masterworks of the Classical Haida Mythtellers.". Seller Inventory # 002321

Book Description Condition: Fair. Independent family-run bookstore for over 50 years! Buy with confidence! Book is in acceptable condition with wear to the pages, binding, and some marks within. Seller Inventory # bk1550548034xvz189zvxacp

Nine Visits to the Mythworld