Items related to The Captain's Woman 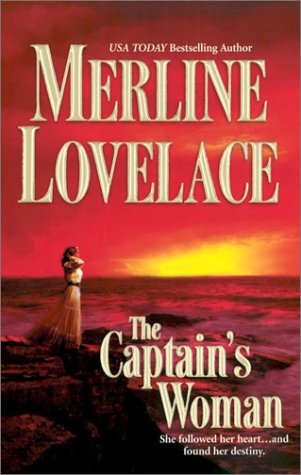 When Journalist Victoria Parker follows Captain Sam Garrett, the man she has loved for years, into battle when he joins Teddy Roosevelt's legendary Rough Riders, she discovers her true calling in life when she begins reporting on the heroic efforts of the American nurses. Original.

This book's title, and its cover, which depicts a long-gowned woman gazing passively out to sea, don't indicate that Lovelace's latest (after The Colonel's Daughter) is anything but a stereotypical romance between a swashbuckling hero and doormat heroine. There's more here than appearances suggest, however. Third in a series about army life and love in frontier America, the tale centers on the relationship between spirited, spoiled 17-year-old journalist Victoria Parker and young cavalry officer Sam Garrett. Despite Sam's love for a beautiful and dedicated nurse, he and Victoria impulsively get engaged after falling in lust on the eve of the Spanish American War. Following the couple from their Cheyenne, Wyo., hometown to war-torn Cuba, Lovelace, a retired air force colonel, brings her central theme-the creation of the U.S. Army Nurse Corps-to vivid life by focusing on Sam's struggles as one of Teddy Roosevelt's Rough Riders, Victoria's maturing from society fluff writer into respected war correspondent and the battle-driven evolution of their relationship from mere passion to impassioned love. As rich in history as it is in character, this romance is an inspirational delight.
Copyright 2002 Reed Business Information, Inc.

No man is going to tell free-spirited reporter Victoria Parker what to do, so after she dutifully sees Captain Sam Garrett, the love of her life, off to the war in Cuba, she sets out after him. But nothing in Victoria's young life has prepared her for the wounded soldiers and the plague of yellow fever. Romance--and maturity--come hard for a feisty young woman in this adventure-filled story, the third in the consistently enjoyable Garrett Family saga (The Horse Soldier [2001] and The Colonel's Daughter [2002]). In one of the few romances set during the Spanish American War, historical figures such as Teddy Roosevelt, Frederic Remington, Stephen Crane, and Clara Barton pop up from time to time to add interest and an authentic feel to the story, and a compelling subplot illuminates the creation of the U.S. Army Nurse Corps. It is the rare author who writes contemporary and historical fiction with equal facility, but Lovelace proves over and over again that she has mastered both. Shelley Mosley
Copyright © American Library Association. All rights reserved