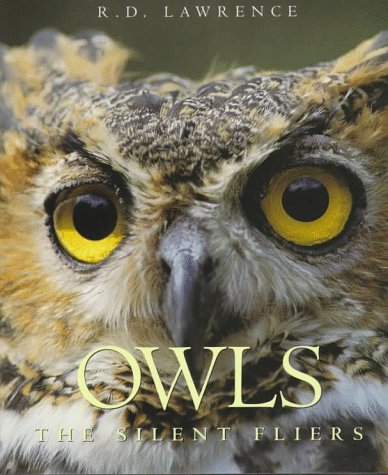 For centuries, owls have held an extraordinary fascination for people. Since Roman times, they have both been persecuted as harbingers of death and treasured as the embodiment of good fortune. Even today they are shot and trapped for sport or killed for the supposed curative powers of their eyes and feathers. It is a testament to the owl's great intelligence and toughness that it has survived human contact at all.

Today, 19 species of owls can be found in North America and this magnificent book is a celebration of their survival. R.D. Lawrence's engaging text, complemented with dozens of stunning color images by America's top wildlife photographers, explains how owls hunt, what they feed on, how they see in the dark and much more. Each chapter focuses on a different species, from the majestic great horned owl and the rare ferruginous pygmy owl to the strange looking barn owl.

These individual portraits include each bird's vital statistics, along with range maps, information on their typical nesting and breeding patterns and detailed descriptions of their relationships with their family and environment. Lastly, owl-watching tips will inform every bird watcher.

R.D. Lawrence is one of the world's most noted wildlife champions. He began his own adventures with owls when he rescued and healed two injured birds. Lawrence is an internationally recognized authority on wilderness and environmental conservation and is the author of Trail of the Wolf.

Taken from the Foreword to Owls: The Silent Fliers

Some years ago, as I was returning home at night through our forest, I was considerably startled when a saw-whet owl elected to land on my left shoulder. The bird found me in the dark as I was about to emerge from the trees and enter our clearing. I did not hear its approach, of course, and it landed so lightly that 1 at first thought it was a large sphinx moth. There are plenty of them in our region of Ontario and they have at times blundered into me in the dark. Indeed, if the little owl had not rearranged its feathers, causing the edges of one wing to touch my neck, I would have brushed it away, thinking that it was a moth; but, on feeling the soft touch, I realized that my visitor was a saw-whet owl and once again I marveled at its soundless arrival.

The saw-whet remained quietly on my shoulder as I continued my homeward stroll, once again thinking about the many ways that Nature, through elegant and uncountable designs, has ensured the continuity of life on the planet. Nevertheless, as my thoughts turned and focused on the ghostly arrival of the owl, and especially on its landing on my person, it occurred to me that what often means salvation for one animal as often leads to the death of another -- a foraging white-footed mouse, for example, is doomed when seen, heard or even possibly smelled by a hunting owl. Yet, although I am fond of white-footed mice (Peromyscus maniculatus) to the extent that when they invade our home I set live traps instead of killing them, I cannot begrudge an owl for killing and eating the sleek and pleasant little rodents.

The silent flight of the owls is unique. At some time in the distant past, it was by degrees (and undoubtedly over a long period) made possible by a simple change in two feathers: the first primary on each wing, the forward edges of which have become serrated (fluffy) instead of being smooth like those of all other species of birds. During flight, the serrated edges interrupt the air flow over each wing and so eliminate the turbulent noise that is otherwise made by the flight of other birds.

Thus, when the saw-whet landed on my shoulder without so much as a whisper, I was not surprised once I had identified my unexpected companion. Indeed, I was pleased, and not at all taken aback, inasmuch as I felt sure that it was the bird I had been feeding for the past three weeks after it had landed late one evening on the railing of our veranda. Since that time I had put out food every night -- raw, boneless chicken pieces -- on the roof of a bird feeder, which stands under a huge spruce tree some forty feet from one of the windows of our home.

The owl was a female, as I was later to discover, and she had soon got used to food time, which I had set at 10 pm. Thereafter, to my surprise and pleasure, she would allow me to watch her behavior from a distance of about six feet.

Then, two weeks after she had landed on my shoulder, she fed from my fingers for the first time and, from then on, whenever I was late returning from my evening walk in the forest, she would search for me, finding me quickly when her acute hearing picked up the sound of my footsteps, but taking just a little longer when, trying to fool her, I would stop moving on hearing her calls. On those occasions she would evidently rely on scent and vision, but, in any event, she invariably located me, no matter how dark it was, after which she would scold me (or maybe she was greeting me?) with her pleasant, whistled notes. Like all of her kind, she repeated these almost endlessly -- the saw-whet's call has been timed at between one hundred and one hundred and thirty times in a minute. It is from the little owl's high-pitched series of too too too too too calls that it has derived its name, for the repetitive notes sound as though a large bucksaw is being sharpened with a file.