Items related to A Dangerous Ride 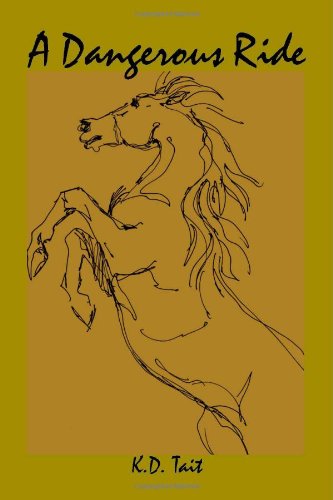 A young veterinarian becomes embroiled in a mysterious man's life after he is found unconscious on her Colorado Ranch.

Born in St. Catharines, Ontario, Canada in 1958, I have been obsessed with horses for as long as I can remember. Together with my twin sister, Patricia, I haunted local riding establishments, pestered neighborhood farmers and generally rode anything that would allow me on board. I spent the bulk of my youth at Silver Acres Riding Academy and got my first horse at fourteen--a half-broke, demented Saddlebred mare, who, when she wasn't tearing though pastoral vineyards with me, taught me infinite patience and self-preservation.

Since then, I have worked in the horse industry in all manner of fields, including breeding, breaking and training, Standardbred racing, a college field-placement at Woodbine racetrack, a year of show-jumping and hunter trials in Surrey, England, and I was fortunate to work for a time in Pueblo, Colorado, on a relative's Arabian stock-farm. Upon returning home, I was bitten by the dressage bug and have stayed ever since.

Currently, I am focusing on improving my Trakhener/Thoroughbred mare's talents for advanced-level dressage and enjoy competing at local shows. When not riding or writing, I am usually pulling weeds in my garden or wandering around the back roads of Erin Township with my camera. A Dangerous Ride is my first published novel.

They didn't have to go very far to find out what had brought the vultures to this part of the canyon. Tally was almost certain they would find the half-eaten carcass of a deer; there had been the occasional cougar roaming these parts of southern Colorado and they would take down anything that happened into their territorial quest for food. Even her client's animals hadn't escaped the big cats' desperate need to hunt. She'd seen what those claws could do, having had to patch-up one or two horses in the past as a result of a cougar attack.

Deer or coyote, she guessed, having some idea it would be a corpse of substantial size, due to the many scavenger birds hovering like dark clouds in the azure sky, and that's what she was looking for when the mule team rounded the bend. She scanned the sandy riverbank for signs of death. A bloated, stinking carcass of something rotting in the sun? Instead, what she saw was what looked to be a bundle or rags. Laundry, was her first thought, but who would leave their dirty clothes here? This far from any civilized road?

Jesse spotted it at the same time as Tally did. He brought the mules to a halt.

"What the hell is that? "Tally asked, already getting off the seat.

Jesse's hand on her arm stopped her dead in her tracks. She glanced up sharply, wondering what was wrong, and she saw he was doing it again...seeing things from a different perspective. His eyes had gone flat and cold.

She hesitated, gazing back at the bundle of rags. "Jesse, let me go," she said.

He released her arm and she clambered down off the seat. She started down the bank, skidding in the loose shale and she stepped out onto the sand. Hard to believe this meandering creek had once swollen into a raging torrent. The mud had all but dried up, cracking like skin and shrinking from the fierce heat of the sun. There were pools of water trapped in the hollows. She skirted around these, sinking into the soft sand and her boots got soaked. All this was barely felt--the burning glare of the sun, the velvety warmth of the water over her feet, the smell of sage and aspen growing up around the stream banks. Her one main thought was getting over to the pile of rags lying half in water. Blue, she saw, coming closer. Blue shirt, faded and torn and stuck in sand. Pants too, dark and wet, soaking up water where they trailed in the stream. The bundle of rags had arms and legs too. Definitely man-shaped.

A sick wave of dread washed over her. Tally realized then, gazing across the sandbar with narrowed eyes, that she was probably looking at a dead body.

Jesse was suddenly at her side.

Tally put her hand over her mouth. "Oh, my God..." was about all she could get out.

Jesse spun around, staring hard into her eyes. "He needs help..." His own voice was choked and dry.

How she ever got across the sandbar without falling flat on her face she never knew. Three years of medical training gave her life-saving skills comparable to an intern but she doubted it would be enough to help this man. Even at fist glance she knew it would take a hospital trauma team to save him. Not some veterinarian stuck out in the middle of nowhere!

Jesse put a voice to her concerns. "You're all he's got, Tally," he stated, sounding as helpless as she felt. "Help him."

She got down on her knees beside the unconscious man and quickly assessed the situation, outwardly calm but inside she was panicking. What was she doing?