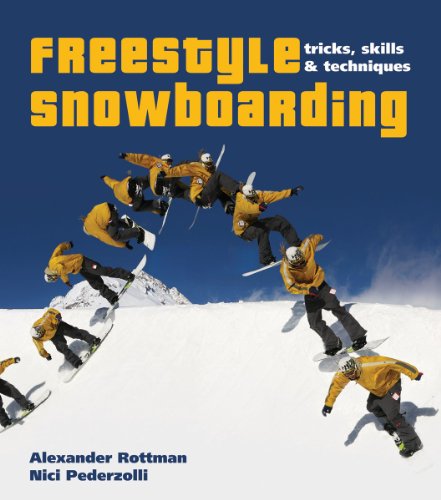 Freestyle tricks for the more than 5 million American snowboarders who hit the slopes every season.

Freestyle Snowboarding is the avid boarder's guide to the skills and stunts that earned medals for Olympic superstars Shaun White and Hannah Teter. Each technique or trick is shown in a "slow-motion" sequence of terrific step-by-step photos. Better than a brief 1-2-3 sequence, this visual presentation clearly shows the subtle changes in form that can turn a poorly executed maneuver into a precise move that ends with a perfect square landing.

The book begins with a review of the basic skills, which is followed by more than 60 tricks in four sections:

Nine champion boarders demonstrate the tricks and techniques in sequential photographs, and the authors give tips on the takeoff, airtime and landing, as well as variations and how to fix common mistakes.

Alexander Rottmann was a member of the German and Austrian national snowboarding teams and of Germany's 2002 and 2006 Olympic teams.

Nici Pederzolli is a snowboarding champion who has placed in many world-class competitions, including the 1998 Nagano and 2002 Salt Lake City Olympics.

This excellent volume written by two snowboarding professionals is expertly explained, lavishly illustrated, and extremely well presented. Each author gives a succinct insight into the sport at the start... This book details everything from basic riding to flat tricks to straight jump to half pipe to rails/boxes. It includes a glossary, further information (FIS rules and general courtesies for half-pipe and space for executing tricks) equipment, parks around the world, and helpful websites. The tricks for this volume are photographed at numerous venues, giving further evidence to the global nature of snowboarding its universal appeal. Again, the detail for each trick's technical execution to tips for improvement when encountering various problems is straightforward and refreshingly clear. (Lesley Little Resource Links)