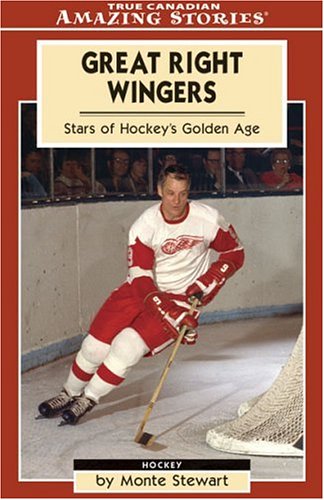 The legendary right wingers featured in this collection skated with speed, scored with style and delivered the goals with prowess and power. Men of the melee, they consistently came out of the corners controlling the puck. Hockey hotshots like Bill Mosienko, who was an adept playmaker, Gordie Howe, who perfected an unexpected and powerful backhand, and Maurice Richard, who went in like a rocket, led the charge down the ice.

Monte Stewart has written about the NHL since the 1980s. From 1987 to 1993, he covered the Flames for the Calgary Herald. Montes articles on hockey and other topics have appeared in such publications as A Century of the National Hockey League, Hockey Today, The San Jose Mercury-News, Business Edge, Profit Magazine, New Technology Magazine and Chicken Soup for the Preteen Soul. Monte has also edited several books and articles and taught journalism, writing and Internet-related courses at the Southern Alberta Institute of Technology, the University of Calgary and other post-secondary institutions. After living in Calgary for almost two decades, Monte returned to his hometown of Vancouver, BC, in the spring of 2004.