Items related to My Mother Is a French Fry and Further Proof of My Fuzzed-Up...

Sydor, Colleen My Mother Is a French Fry and Further Proof of My Fuzzed-Up Life 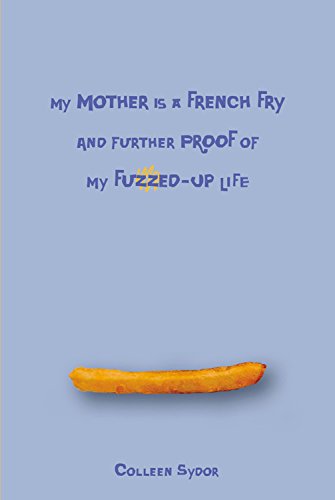 It makes Eli cringe when her mother comes home proudly dressed in a foam rubber French fry suit after her first day as a mascot for Burgers ?n' Fries. Families come in many forms in the animal kingdom, Eli's teacher had informed her. Sure, but ? French fries? How can her mother be so unembarrassable? When 15-year-old Eli Smyth isn't fuming over her mother's goofy jobs and total lack of inhibition, she's envious of Grace. Eli's best friend has two dads, both tres cool, and neither dresses up as fast food for a living. Maybe JG can understand. He's the boy in her class who shares her appreciation of rock band Decapitated Heads and also happens to have problems with his dad. Nobody's parents, though, are as wacko as Eli's mom. Everything she says and does drives Eli crazy. The too-frank sex-talks, the penchant for clothing that resembles flour sacks; the list goes on ? It seems her mom can't do much more to aggravate Eli ? and then gets pregnant. To Eli, there's nothing more disgusting than pregnancy. Now that her mother's puking her guts out most mornings and beginning to look like Jabba the Hut, what if she needs Eli's love and understanding? Will Eli be there for her?

Colleen Sydor lives in Winnipeg, Manitoba, with her family. She is the author of Camilla Chameleon and Raising a Little Stink. My Mother is a French Fry is her first novel for young adults.

Grade 8–10—Eli Smyth, 15, doesn't like her mother. She has many reasons: the woman talks to anyone and everyone, she's much too frank when it comes to sex-ed lectures, and her decorating style involves items salvaged from the neighbors' garbage. Topping the list of offenses is the giant rubber French fry costume her mother wears to work at Burgers 'n' Frize. The teen rarely talks to her, and makes it painfully clear that she vastly prefers her father's affection. She thinks her life can't get any worse, but then her parents drop the bomb: her mother's not only embarrassing—she's also pregnant. Eli's stress level skyrockets, and she begins to experience panic attacks. Adding to the insanity is a new boyfriend with problems of his own. Readers will relate to Eli's conflicted feelings about her mother and her struggle to mend the deepening cracks in their relationship. Certain elements of the plot are predictable, but that's forgivable as Eli's internal battle is realistic. Recommend this one to fans of E. Lockhart's "Ruby Oliver" series (Delacorte).—Lindsay Cesari, Baldwinsville School District, NY
Copyright © Reed Business Information, a division of Reed Elsevier Inc. All rights reserved.

1. My Mother Is a French Fry and Further Proof of My Fuzzed-Up Life

2. My Mother Is a French Fry and Further Proof of My Fuzzed-Up Life Sydor, Colleen