Items related to Mockery Of Justice: The True Story of the Sheppard...

Mockery Of Justice: The True Story of the Sheppard Murder Case 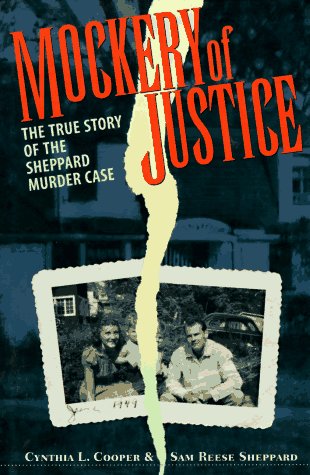 Although Dr. Sam Sheppard's conviction for the infamous and brutal 1954 murder of his wife Marilyn was overturned in the 1960s, the real killer has never been identified. In Mockery of Justice, his son Sam Reese Sheppard and attorney Cynthia L. Cooper reinvestigate the crime. Drawing on recently recovered documents, Sheppard family papers, and interviews with new witnesses and suspects, they offer convincing evidence pointing to the real murderer, evidence that has persuaded the Cuyahoga County Prosecutor to reopen the investigation into the case.

In 1996, Sam Reese Sheppard spoke on All Things Considered: "My mother and dad were very flamboyant people.... They were out of step ... in the Bible Belt of Ohio at that time, but, very quickly, and it happens today, a high-profile case spins out of control, and hatred and hysteria rise in the community. When a pregnant woman dies in an ugly way in our community, people are stricken with fear ... the blame on my dad got pinpointed by the newspapers." Dr. Sheppard was convicted of the 1954 murder of his wife. In 1966 the U.S. Supreme Court ruled that he'd been denied a fair trial. He was re-tried, found innocent, then died a few years later. Mockery of Justice goes into all the details: Dr. Sheppard's own account of that night, the role of a powerful coroner, the media frenzy, the mysteries surrounding the case records, and the recent investigation of a likely suspect for the murder. The analysis of forensic riddles posed by the complex crime scene makes for especially intriguing reading. The book includes map, timeline, footnotes, and index.

Just as the O.J. Simpson case is the trial of the 1990s, the Sam Sheppard case was the trial of the 1950s and 1960s. Because of pretrial publicity and the police department's sloppy investigation, Dr. Sheppard was convicted of murdering his wife, Marilyn. The police and the media never considered any other suspects in this case. Sheppard proclaimed his innocence and appealed his conviction. F. Lee Bailey, unknown at the time, took over the case when Sheppard's lawyer died and successfully argued for a new trial because of the pretrial publicity and the "rush to judgment" on the case. The Supreme Court decision set the standard for future trials and procedures. Cooper, a lawyer, and Sam Reese Sheppard, the doctor's only child and a death penalty opponent, present their case that Sam Sheppard was innocent and suggest others who were never investigated as possible suspects. Officially, the case on Marilyn Sheppard remains unsolved. The Cuyahoga County prosecutor is currently reviewing the facts in the case to determine whether it should be reopened. Expect demand because of the subject and increased demand should the case be reinvestigated. Strongly recommended for all libraries.?Michael Sawyer, Clinton P.L., Ia.
Copyright 1995 Reed Business Information, Inc.

1. Mockery Of Justice: The True Story of the Sheppard Murder Case

2. Mockery Of Justice: The True Story of the Sheppard Murder Case

3. Mockery Of Justice: The True Story of the Sheppard Murder Case

4. Mockery of Justice : True Story of the Sheppard Murder Case : ()