Items related to Theatrical Performance During the Holocaust (PAJ Books) 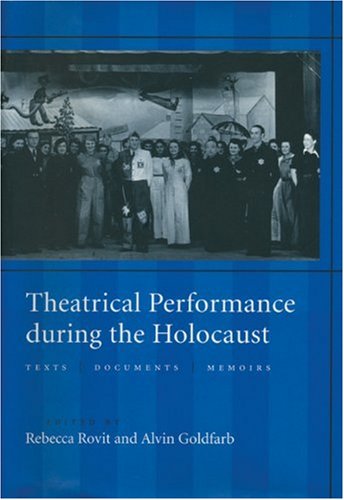 This volume collects for the first time critical essays, memoirs, and primary source materials relating to the surprising history of Jewish drama, cabaret, music, and opera under the Third Reich. These documents offer the remarkable account of a phenomenon that existed across Nazi Europe, in German cities, in Eastern European ghettos, and in concentration camps.

Rebecca Rovit is a theater historian who has written widely on performance and the Holocaust. Alvin Goldfarb is the president and a professor of theater at Western Illinois University.

"A moving and stimulating book." -- Freddie Rokem, Theatre Journal "Compelling and even poignant accounts of ghetto performances." -- Ulrich Baer, German Studies Review "The editors present a vivid picture of courage and resilience, dedicated to the memory of those artists who performed during the Holocaust years." -- Choice

1. Theatrical Performance During the Holocaust

Book Description P A J Publications. Paperback. Condition: Good. A copy that has been read, but remains in clean condition. All pages are intact, and the cover is intact. The spine may show signs of wear. Pages can include limited notes and highlighting, and the copy can include previous owner inscriptions. At ThriftBooks, our motto is: Read More, Spend Less. Seller Inventory # G1555540759I3N00

Book Description PAJ Publications, 2006. Condition: Good. A+ Customer service! Satisfaction Guaranteed! Book is in Used-Good condition. Pages and cover are clean and intact. Used items may not include supplementary materials such as CDs or access codes. May show signs of minor shelf wear and contain limited notes and highlighting. Seller Inventory # 1555540759-2-4