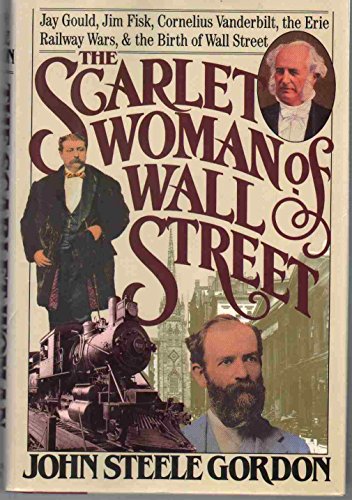 Details the financial intrigue that erupted over the Erie Railway

Starting with the industrial revolution sparked by the steam engine, Gordon ( Overlanding , etc.) chronicles with clarity and wit the evolution of the free-market exchange of the booming post-Civil War era, during which Wall Street became the world's second largest financial center. He focuses on the cutthroat competition and legislative and legal battles for control of New York's regional railways. The Eriethe eponymous Scarlet Womanwas the object of fierce speculation by the notorious confidence man Daniel Drew and such financial tycoons as "Jubilee" Jim Fisk and Gould, the latter's gold speculations having almost single-handedly caused the 1869 panic in the Street. By 1870, as competition for Chicago and Western rail connections became acute, a rate war instigated by Vanderbilt broke out between his New York Central and Erie. The assassination of the popular Fisk led to the violent ouster of his partner Gould from Erie's presidency, followed by a steady decline in the railroad's fortunes until its demise as a separate company in the early 1970s. Illustrations not seen by PW.
Copyright 1988 Reed Business Information, Inc.

Railroads were America's first big business; their stock quickly caught the interest not only of prudent investors but of speculators intent on making a quick profit and selling out. Speculation in railroad stocks peaked between the end of the Civil War and the Panic of 1873; nobody was more successfulor ruthlessat manipulating the market than Gould, Fisk, and Vanderbilt, and no railroad was more thoroughly plundered than the hapless Erie. Gordon vividly chronicles this extravagant era, making extensive use of contemporary accounts; his treatment is fair, his writing graceful and witty. The bizarre and tragic Fisk is especially well portrayed. Good popular history; recommended. Paul B. Cors, Univ. of Wyoming Lib., Laramie
Copyright 1988 Reed Business Information, Inc.