Items related to Erasure: A Novel 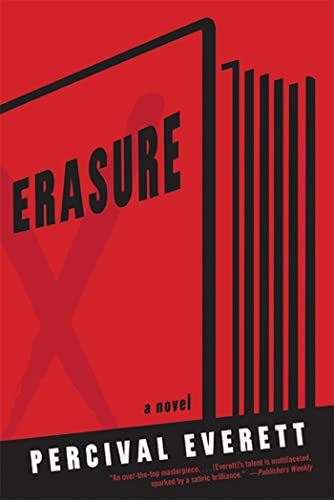 Thelonious "Monk" Ellison's writing career has bottomed out: his latest manuscript has been rejected by seventeen publishers, which stings all the more because his previous novels have been "critically acclaimed." He seethes on the sidelines of the literary establishment as he watches the meteoric success of We's Lives in Da Ghetto, a first novel by a woman who once visited "some relatives in Harlem for a couple of days." Meanwhile, Monk struggles with real family tragedies―his aged mother is fast succumbing to Alzheimer's, and he still grapples with the reverberations of his father's suicide seven years before.

In his rage and despair, Monk dashes off a novel meant to be an indictment of Juanita Mae Jenkins's bestseller. He doesn't intend for My Pafology to be published, let alone taken seriously, but it is―under the pseudonym Stagg R. Leigh―and soon it becomes the Next Big Thing. How Monk deals with the personal and professional fallout galvanizes this audacious, hysterical, and quietly devastating novel.

Percival Everett is Distinguished Professor of English at the University of Southern California and the author of seventeen novels, including I Am Not Sidney Poitier, The Water Cure, Wounded, and Glyph.

Book Description Paperback. Condition: New. Paperback. Shipping may be from multiple locations in the US or from the UK, depending on stock availability. 265 pages. 0.358. Seller Inventory # 9781555975999