Items related to Ashland, Ashland: The Story of a Turn-Of-The-Century...

Ashland, Ashland: The Story of a Turn-Of-The-Century Railroad Town 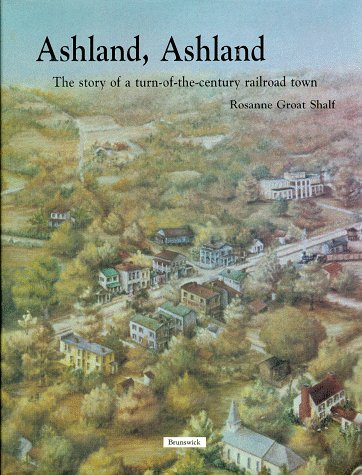 Ashland, Ashland is the story of a nineteenth century mineral springs resort and race course in Virginia known originally as "Slash Cottage." Developed by the Richmond Fredericksburg and Potomac Railroad Company in the 1850s, the town became the site of a Confederate cavalry training camp at the beginning of the Civil War. Later in the war, it was filled to overflowing with refugees fleeing the fighting in Northern Virginia. Ashland even figures in a supposed plot to kidnap President Lincoln near the end of the war. Close to bankruptcy by war's end, the town and the resort were saved when Randolph-Macon College decided to relocate their school in Ashland to be more accessible to potential students by train. By the turn of the century, the town was so successful that Jay Gould decided to run an electric streetcar line from Richmond to Ashland, which, along with the RF&P's Accommodation Train, helped the town develop further as a classic "streetcar suburb." The dark side of the town's story includes a major embezzlement scandal, a race riot, and a murder mystery that remains unsolved. But there are also heart-warming stories of housewives feeding the railroad hobos, a dignified college president standing up to hate-mongers, and neighbors helping neighbors through the difficult days of the Great Depression. Woven throughout the story are first-hand accounts from newspapers of the day, diaries, letters, memoirs, and oral histories about what it was like to live in Ashland. The author has combined these personal anecdotes with primary and respected secondary historical sources to present Ashland's story in the context of broader historical patterns. Close to one hundred and fifty photographs illustrate Ashland's changing face. The book includes an extensive index, footnotes, and resource information-the first-ever-compiled list of Town Council members from 1889 to the present.

Ashland, Ashland is a labor of love by town resident Rosanne Groat Shalf. A history graduate of Randolph-Macon College, Shalf has spent more than a decade searching archives, government records, and other primary source material to document the history of Ashland and its architecture. She has collected more than forty oral histories of Ashland residents interviewed by herself and others. She assisted Virginia's Department of Historic Resources in preparing its successful nomination of the town's historic district to the state and national register of historic places, and she has written about Ashland's unusual history and unique architecture. This, her first local history, represents a significant contribution to the lasting heritage of this historic railroad town.

Council was responsible for the management of all the fiscal and municipal affairs of the town, and the laws in the 1894 code book provide a picture of sorts of the town at that time.

Clean, Shady Streets. Streets were of primary importance. While Council hired a street commissioner to supervise and enforce the building and maintenance of streets, it was the townspeople who did the work. By the 1894 town charter, the street commissioner had the power to require men between the ages of sixteen and sixty to work up to three days a year on the roads or pay seventy-five cents per day, but townspeople were exempt from similar requirements to work on county roads or paying the county road tax. The town's street trees were protected by ordinance, as well. People could be fined up to five dollars for tying a horse to a public shade tree or to the boxing around it or for injuring the trees in any way.i Shopkeepers on Railroad Avenue were to have the snow cleared from the street in front of their shops within five hours after the snow stopped. Vehicle speed was limited to five miles per hour, but in any case one could not ride an unbroken horse in town, nor could a person ride a bike with a wheel diameter wider than eighteen inches on the sidewalks. The speed limit of trains was limited to twenty miles an hour and trains could not stop in the middle of town, obstructing traffic, for more than five minutes. Trains were required to ring their bells while coming through town but could be fined between $2.50 and $5 for blowing their whistles within the town limits.ii

Hobos: No Visible Means of Support. Because Ashland was a railroad town, vagrants were a constant concern. Vagrants were defined as able-bodied people who beg instead of work, those having "no visible means of support," or people who had been banished from town and returned illegally. The railroad company was responsible for removing any that it had allowed to come into town via their trains. Convicted vagrants could be ordered out of town or required to work on public projects for a month, restrained with a ball and chain, and kept in the jail when not working. If they refused to work, they could be jailed for a month and fed nothing but bread and water.iii

Morals, Decency, and Nuisances. Morals of the townspeople were also the purview of Town Council. To preserve small town morals, barrooms, barbershops, and other businesses were closed on Sundays. Gambling, drunkenness, and sleeping in public places were prohibited at all times. Concealed weapons were forbidden, and shooting firearms in the streets was not allowed. Not only were owners required to dispose of dead horses and cows properly, a citizen could not bury a deceased relative in the back yard. While hog pens were not forbidden, if they became unsavory, they could be closed down. A stand of stagnant water was considered a nuisance and had to be filled or drained, but a person could not block or fill in drainage ditches or streams.iv

The Mayor Meted out Punishment. Around the turn of the century, after the new Town Hall was built at 112 Thompson Street, the mayor presided over the town court on the second floor, and the fire and police departments were located below. The town jail, built in 1900, was a single story, fortified brick building with a metal roof, located at the rear of the Town Hall.v Any person refusing to pay a fine was confined in the town jail. Parents were liable for the punishment imposed for the misdeeds of their children, masters were liable for their apprentices, and husbands were liable for their wives.vi

They Walked to School Even in the Snow. Public schools were mandated in Virginia in 1870, but Hanover had been authorized to have public free schools since 1850, when the General Assembly gave the county the right to collect taxes for public education. We don't know exactly when the schools were actually opened, but by 1852 the county was divided into six school districts, and by 1902, there were ninety-nine schools in the county. In 1903 there were 1,613 white students and 1,527 colored in ninety-one segregated public schools, most of which were one-room school houses that were open six months of the year. There were fifty-eight white teachers and thirty-three colored-twenty-eight students per teacher in the white schools compared to 46 students per teacher in the colored ones.vii

Less information is available about the schools of the town of Ashland, but we do know that public school was being taught in town as early as 1883, and Town Council, in 1897 and 1898, paid six teachers of the town school children for working February through June.viii There is other evidence that school operated from September through June.ix

1. Ashland, Ashland: The Story of a Turn-Of-The-Century Railroad Town