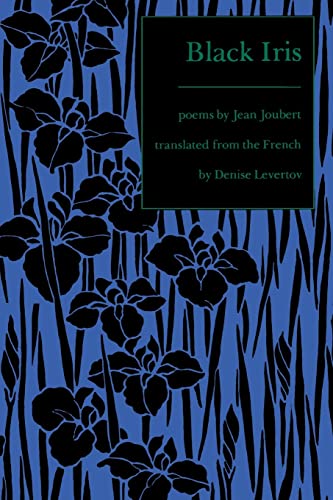 In Levertov's hands, Joubert's poems take on an English language musicality which corresponds to that of the original French. Bilingual edition.

From poems inspired by paintings to reveries of childhood and meditations on the universe, Joubert fabricates verses whose rhythms have the texture of fables. discloses a world..... to fabricate? dis doan make sense..and, does the work consist of poems and reveries? not clear. where ?? In "Standing Stones in the Forest," those who travel beyond the village encounter their mythical origins: " . . . and in terror / we know now there's no turning back, / we'll have to keep walking, alone in the crescent moonlight / all the way to that heart which beats in the deepest forest / and desires us." Unfortunately, the visions are sometimes reduced to philosophical dullness, as in "The Library," where the rich language of the first lines crumbles to indulgent speculation: "My own books, too, / take up a half-shelfand what space remains / will be all that's needed, though I sense that / almost everything's left unsaid." Yet, overall, these poems approximate the palpable mysteries where "the chill trees robed in salt and blackness / uphold the squalor, the marvel." This is a bilingual French-English edition.
Copyright 1988 Reed Business Information, Inc.