Items related to America's Great Comic-Strip Artists: From the Yellow...

America's Great Comic-Strip Artists: From the Yellow Kid to Peanuts 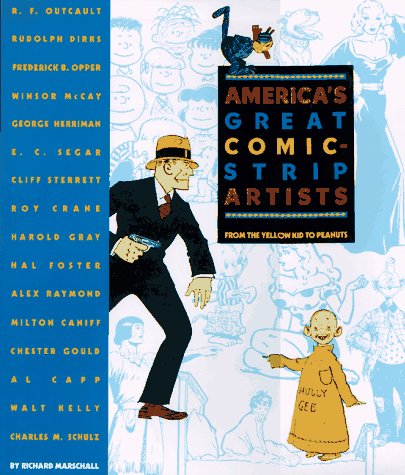 A treasury of outstanding graphics and rare and beautiful comic art, this book is also a history of the art form itself, as seen through the work of 16 of the finest cartoonists of the last century, including Al Capp, Charles M. Schulz, Walt Kelly and Chester Gould. Marschall's fascinating text portrays the life and times of these artists, demonstrating their influence on American art and society. 250 illustrations, many in full-color.

One line in this beautiful coffee-table book on early comic-strip artists, America's Great Comic-Strip Artists, stands out: "Although George Herriman is the most celebrated comic-strip artist of all time--and by common agreement the greatest--his best-known strip, Krazy Kat, has been praised by people who have never seen it." While many people may be familiar with the featured artists or with their work (Little Nemo, Popeye, Dick Tracy, Peanuts), the wealth of artistry in America's comics pioneers is something not to be overlooked. To examine the illustrations that begin each chapter--details of each artist's work enlarged so that you can see the grain of the paper and the dot patterns of color--is to be in awe of these graphic art masters. Richard Marschall's loving history begs to be visited again and again.

A swiftly paced and engrossing survey of the lives and careers of the most influential and original creators of comic strips, ranging across the hundred-year history of the genre. Marschall, the editor of Hogan's Alley: The Journal of the Cartoon Arts, brings an extraordinary fund of knowledge to the project and a refreshingly sharp, frank critical sense. Beginning with R.F. Outcault, the creator in the late 19th century of the phenomenally popular ``Yellow Kid'' and ``Hogan's Alley,'' and concluding with Charles Schultz and the ubiquitous ``Peanuts'' strip, these profiles offer a nice blend of the biographical and the critical. Indeed, Marschall's pieces on such diverse figures as George Herriman (the shy genius who created ``Krazy Kat'') and Al Capp (``Lil' Abner'') are superb introductions to the artists and their creations, and the most succinct and convincing evaluations of their work available. E.C. Segar (``Popeye''), Harold Gray (``Little Orphan Annie''), Hal Foster (``Prince Valiant''), Milton Caniff (``Terry and the Pirate''), and Walt Kelly (``Pogo'') are among those profiled. A handsome, lively introduction to the genre. (250 color and b&w illustrations) -- Copyright ©1997, Kirkus Associates, LP. All rights reserved.

1. America's Great Comic-Strip Artists: From the Yellow Kid to Peanuts

2. America's Great Comic-Strip Artists: From the Yellow Kid to Peanuts