Items related to The Mummy and Miss Nitocris: A Phantasy of the Fourth...

Griffith, George The Mummy and Miss Nitocris: A Phantasy of the Fourth Dimension

The Mummy and Miss Nitocris: A Phantasy of the Fourth Dimension 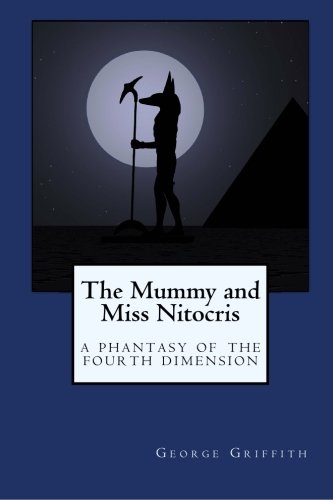 George Griffith (1857-1906) was a prolific British science fiction writer and noted explorer who wrote during the late Victorian and Edwardian age. Many of his visionary tales appeared in magazines such as "Pearson's Magazine" and "Pearson's Weekly" before being published as novels. Griffith was extremely popular in the United Kingdom, though he failed to find similar acclaim in the United States, in part due to his revolutionary and socialist views. A journalist, rather than scientist by background, what his stories lack in scientific rigor and literary grace they make up for in sheer exuberance of execution. Although eternally overshadowed by H. G. Wells, Griffith's epic fantasies of romantic anarchists in a future world of war dominated by airship battlefleets and grandiose engineering provided a template for steampunk novels a century before the term was coined. The influence of books such as "The Angel of the Revolution" and the character of Olga Romanoff on British fantasy writer Michael Moorcock is striking. The concept of revolutionaries imposing "a 'pax aeronautica' over the earth," at the center of Angel of the Revolution, was taken up by Wells many years later, in "The Shape of Things to Come." Though a less accomplished writer than Sir Arthur Conan Doyle, Rudyard Kipling or H.G. Wells, his novels were popular in their day and foreshadowed World War I and the Russian Revolutions and the concepts of the air to surface missile and VTOL aircraft. He wrote several tales of adventure set on contemporary earth, while "The Outlaws of the Air" depicted a future of aerial warfare and the creation of a Pacific island utopia. Sam Moskowitz described him as "undeniably the most popular science fiction writer in England between 1893 and 1895."