Items related to Judges of the Secret Court

Judges of the Secret Court 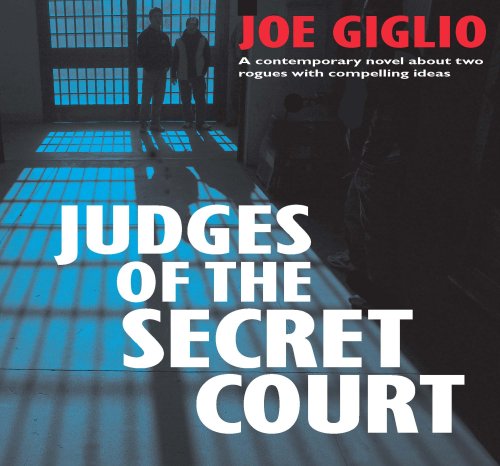 In a radical departure from his previous books, Joe Giglio uses the techniques of popular fiction to dramatize how America s transportation system can be transformed into a vigorous engine for economic growth and to make clear that our ability to meet the challenges of an increasingly competitive global economy depend on this transformation. The book recounts the conversations of two brilliant but self-confessed rogues: a disgraced journalist from Bedford-Stuyvesant trying to rehabilitate his career, and a Wall Street star and Talmudic scholar in prison for Securities Fraud. They explore how the Scarlet Woman of Capitalism can be seduced into financing and managing transportation systems that make money while providing better mobility for the American public. They suggest how government officials can control this process by remembering that saints don t always have to be dumber than sinners. And they look at how a generally clueless public (and its elected representatives) can be conned into acting responsibly for a change to assure the country a prosperous future . Funny, irreverent, and clear-eyed, the book gives today s savvy readers a refreshing dose of real-world insights into creating a New Covenant on transportation between the federal government, state and local governments, and private enterprise that will not simply repair a broken transportation system, but will turn it into a crucial generator of economic growth.

Dr. Giglio's unique background in business, public policy and finance is rooted in his experience on Wall Street, in government service and in academia. Currently, Dr. Giglio teaches strategic management at the Graduate School of Business at Northeastern University in Boston. He joined the full-time faculty in 1997. From 1998 through 2000, he was selected as the outstanding professor at the Graduate School. Dr. Giglio has served as Executive Vice President at Smith Barney, President of Chase Municipal Securities, and a Senior Managing Director at Bear Stearns & Company, three of the largest investment banking firms in the world. And, he was named "Outstanding Investment Banker" by The American Banker for several years in a row. Prior to going to Wall Street, Dr. Giglio held a series of senior management positions with the Federal Government as well as the City and State of New York, including Deputy Commissioner for Health for New York State. Dr. Giglio served as Chairman of President Reagan s National Council on Public Works Improvement, which released its report "Fragile Foundations" in 1988. He also chaired the U.S. Senate Budget Commission on Innovative Financing of Infrastructure. In 1999, Dr.Giglio served as Chairman of the Board of Directors for the Intelligent Transportation Society of America, a federally-charted advisory committee addressing public and private sector technology applications. He is the former Chairman of the Public-Private Division of the American Bond and Transportation Builders Association. Dr. Giglio sits on the board of a number of private corporations and has authored dozens of papers on finance and transportation public policy. He holds a B.A. degree from Rutgers University, holds a Master of Public Administration degree from New York University, and a Master s degree in Business from Columbia University and received his Ph.D. from Northeastern University. He is the author of "Driving Questions: Developing a National Transportation Vision", "Mobility", and "Fast Lane to the Future: The Privatization Route".

1. Judges of the Secret Court : A Contemporary Novel about Two Rogues with Compelling Ideas

Book Description Hudson Institute Press. Paperback. Condition: Good. A copy that has been read, but remains in clean condition. All pages are intact, and the cover is intact. The spine may show signs of wear. Pages can include limited notes and highlighting, and the copy can include previous owner inscriptions. At ThriftBooks, our motto is: Read More, Spend Less. Seller Inventory # G1558131639I3N00

2. Judges of the Secret Court

Book Description Hudson Institute, 2008. Condition: Good. 1st. Former Library book. Shows some signs of wear, and may have some markings on the inside. Seller Inventory # GRP102798173

3. Judges of the Secret Court

4. Judges of the Secret Court

Book Description Hudson Institute, 2008. Condition: Good. A+ Customer service! Satisfaction Guaranteed! Book is in Used-Good condition. Pages and cover are clean and intact. Used items may not include supplementary materials such as CDs or access codes. May show signs of minor shelf wear and contain limited notes and highlighting. Seller Inventory # 1558131639-2-4

5. Judges of the Secret Court

6. Judges of the Secret Court

7. Judges of the Secret Court