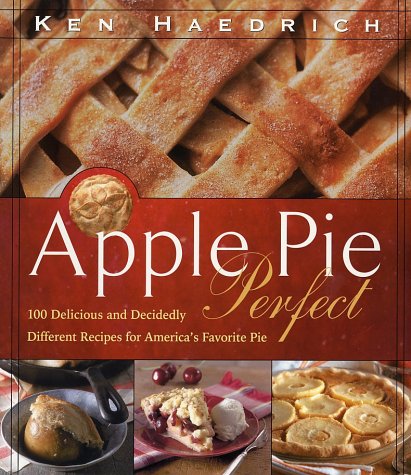 An apple pie lover's dreamâ€”100 recipes for apple pie in all its delcious incarnations, plus a baker's dozen.

Ken Haedrich's Apple Pie Perfect celebrates America's most treasured dessert with 100 definitive recipes--everything from a traditional lattice-topped version and Haedrich's parents' brown sugar pie to newer incarnations, including Baked Apple Dumpling Pie, Apple and Brie Pie, and multifruit delights such as Apple-Plum Pie with Coconut Streusel. Apple Pie 101 and then some, the book first offers 10 versatile crust recipes, including the author's favored All-American Double Crust (which requires both butter, for flavor, and shortening, for tender flakiness), plus a delicious whole wheat version, then proceeds to the pies, arranged according to the seasons. The recipes walk would-be pie makers through the process carefully, which should encourage even the baking novice to try their hand. Sidebars include tips (there's even one on how to avoid a floury telephone receiver when called during crust-rolling), lore, and useful subrecipes (like the one for Spiced Ginger Apple Butter), plus a guide to apple varieties. These further expand the book's usefulness. With a section on "handpies"--apple pie for the fingers, like Apple "Calzone" Pie--and recipes like No-Bake Apple Ice Cream Pie that appeal particularly to kids, the book is a sure best-stop for producing a true American food icon. --Arthur Boehm

KEN HAEDRICH, with his four decades of experience as a "comfort food" cook, has collaborated with The Old Farmer’s Almanac on two books: Comfort Food and Everyday Baking. Author of 13 cookbooks, many from The Harvard Common Press, and winner of the Julia Child Cookbook Award, his recipes, food articles, and tips have brought great food and delicious dishes to millions of people. Ken lives in the Lowcountry of South Carolina, and is the "dean" of The Pie Academy found here: thepieacademy.com.